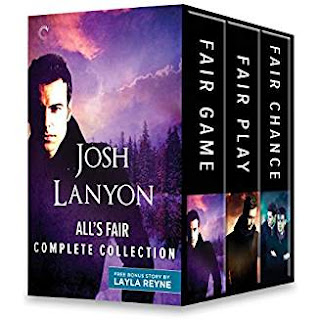 “This is a mistake,” Tucker growled, tying his tie in short, sharp snaps. He scowled at his reflection in the mirror over the desk. No need for the scowl because he looked, as always, like he’d stepped out of the Westport Big & Tall catalog. Handsome and successful.

Elliot, sitting on the side of the hotel bed, glanced down to finish lacing up his black oxfords. “What is? Christmas dinner with your mom and step-dad?”

They were in Wyoming to spend Christmas with Tova and Ed—for the first and possibly only time—and Tucker was starting to exhibit signs of cold feet. Well, hell, December in Wyoming? Cold feet went with the territory. Literally.

“I apologize in advance. This is going to be a day of…”

Tucker shook his head as though words could ne’er express.

Elliot laughed. “Listen, don’t tell me you prefer tofu turkey and listening to my dad rant.”

In the interests of accuracy, Tucker ranted as much as Roland these days. It was kind of heart-warming the way Donald J. Trump had managed to unite both conservatives and liberals.

Elliot rose and brushed down his trousers. “So what? It won’t be the first time we’ve had to sit through a boring briefing.”

“If this is on my behalf, relax,” Elliot said. “I like Jesus. It’s the Old Testament I take issue with. I don’t mind paying Jesus some attention on his birthday. And maybe Tova will turn out to be a great cook.”

But he was smiling when Elliot caught him by his Christmassy-red tie and tugged him in for a kiss.

It turned out they were both right. 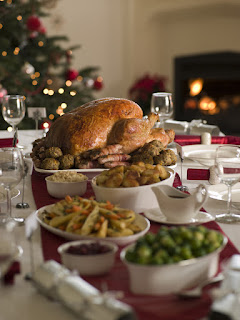 There was indeed Bible reading. Before dinner they gathered in the gigantic living room with the gigantic Christmas tree and the gigantic picture windows gazing out over the gigantic “yard” that encompassed the gigantic house on the prairie where Tova and Ed lived. They listened politely as Ed read in a dry, dusty voice from the Gospels of Luke and John.

“While they were there, the time came for the baby to be born, and she gave birth to her firstborn, a son. She wrapped him in cloths and placed him in a manger, because there was no guest room available for them.”

And then came dinner. Wherever Tucker had inherited his inability to cook, it was not from Tova. In fact, she was a great cook. There was hickory-smoked turkey, walnut sweet potatoes, green beans in a creamy wild mushroom sauce, twice-baked potato casserole, and two kinds of pie: pecan and pumpkin.


Tova had even specially purchased a bottle of Ariel non-alcoholic Cabernet Sauvignon for Elliot and Tucker to share, which Elliot found a really sweet gesture. Especially when the wine turned out to be not that bad.

After dinner there was a rather formal opening of presents while Mel Torme crooned in the background. To Elliot’s relief, the gray cashmere cardigan vest Tucker had chosen for Ed, and the pearl and diamond necklace he’d picked for Tova, were warmly received—Tucker had spent a lot of time and thought trying to select the perfect gifts. 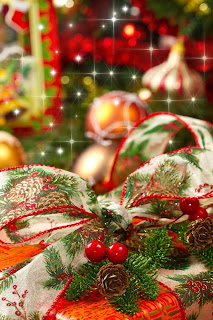 Say what you would about Ed and Tova, they were not stingy. There were presents for both Tucker and Elliot—in fact, it sort of looked like Tova was trying to make up for some of those missed birthday and holidays with an embarrassing landslide of gifts for Tucker: wireless earbuds, a hardwood turntable, Hermès cologne, fur-lined driving gloves… Some of the gifts were right on the mark—a Michael Kors watch, for example—and some seemed like things chosen because Tova just wanted to keep giving and giving—like the Baron Fig notebook and the Polaroid photo printer, which Elliot would inherit before the night was over.

By the time they said their final Merry Christmases, made promises to come again soon, and stumbled out into the bone-cracking cold of the Wyoming night Tucker seemed as relaxed and mellow as if there really had been alcohol in that bottle of wine. It made Elliot happy to see it—in fact, it was the best Christmas gift he could imagine. Tucker spending a genuinely happy holiday with his mom.

On the drive back to town Tucker said, “I just wish they weren’t so obviously proud of themselves for accepting us.”

Elliot, concentrating on navigating the unfamiliar rocky road ahead, smiled faintly. “It was a journey for them. Nobody in their social and professional circles has made that journey yet.”

“That doesn’t make it better.”

“It ought to though. Because they chose to make the journey. They made it willingly.” He glanced from the road to Tucker. “They made it for you.” 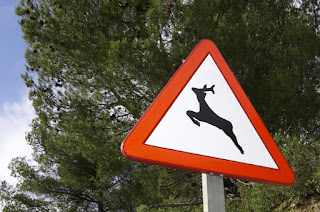 Tucker was silent. Then he said, seemingly at random, “I’ll give this to your father. He’s a genuinely joyful person.”

Elliot threw him a surprised look. Not a word he would have picked to describe his dad, but it was true. Roland lived every moment fully and without regret. He knew how to love--and he did it with all his heart.

And he knew how to throw a party. Fake wine indeed.

“Did you have a good time today?” Elliot asked. “That’s what really matters.”

“I did,” Tucker said. He put his head back against the seat rest and said contentedly, “And I’ll have a better time when I get you back to our hotel room.”