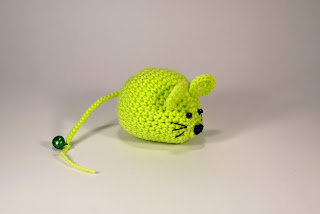 Whether you plan on spending the weekend working, holiday shopping or just enjoying the general merriment of the season, we're giving you a cheery little send off with another fictional charmer from Haldis.

Knit One, Murder One, Miss Butterwith

“Oh hollyhocks!”, swore Miss Butterwith with the force and vehemence she usually reserved for indiscriminate herbicides. It was enough to make Mr. Pinkerton abandon his nap and investigate the potential disaster. 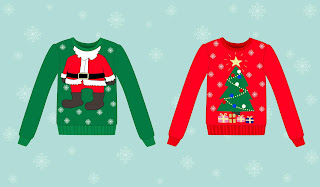 “I can tell you the genus and species of every single plant in our garden, Mr. Pinkerton, but I can not for the life of me figure out how to purl. I think I’ve managed knit, but purl…. look at this, Mr. Pinkerton.” She pointed out an illustration in the book on the little table beside her chair. “And now this.” She held up the tangle of multicoloured Christmas yarn hanging from her knitting needles, silver and gold threads appearing to mock in their cheerfulness. “They’re are supposed to look the same!”

Mr. Pinkerton jumped lightly up on to the table and looked at the picture. Then he turned his attention to the knitting. The only resemblance that he could see was the inclusion of both knitting needles and yarn. That was the end of any similarities.

“Meow”, offered Mr. Pinkerton, his best attempt at a combination of both sympathy and encouragement. Though probably a bit heavier on the sympathy.

“Yes, you’re probably right, Mr. Pinkerton. I don’t know what possessed me to come up with idea to knit matching jumpers for Inspector Appleby and Geoffrey for Christmas.” Miss Butterwith leaned over to whisper conspiratorially into Mr. Pinkerton’s ear, “Honestly though, they would have looked so cute together.”

Honestly, if you asked Mr. Pinkerton, he could not picture the gruff Inspector Appleby in anything in silver and gold cheer whether matching Geoffrey or not. Although, Inspector Appleby had loosened up a bit since he started seeing Geoffrey, so maybe Miss Butterwith was right. But probably not. 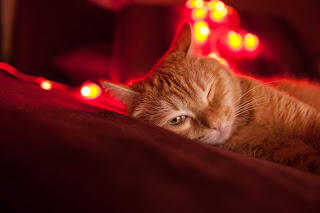 “I really hate to give up on anything, Mr. Pinkerton. Dear me, I don’t know if this is supposed to…. oh, my….” Miss Butterwith was pulling at a loop near the beginning of her work and the whole piece was starting to unravel. “I do believe this might be the death of it, Mr. Pinkerton.”

“Well, you also know how I also hate to waste anything.” She held up the ball of yarn and then tossed it across the floor.  “It’s all yours. Happy Christmas Mr. Pinkerton!”