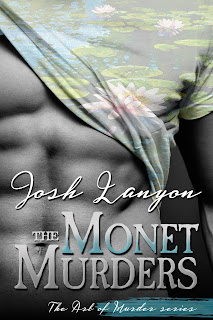 So, remember when I mentioned falling off a mountain (okay, it was just a little mountain, but still) and had to push the release of The Monet Murders back another month because I'd injured my back and was medicated and things were really not going well?

Well, I did finally manage to finish the book and it released yesterday. That's the good news. The bad news is, in my panic to get the file uploaded before the deadline, I somehow (see above: two kinds of prescription pain medications were in play) grabbed the wrong damned file. And because I'd already waited to the last minute, there was no way of updating until the book went live.

Which it did. Missing about 15,000 words. And necessary words, at that.

The correct version is available on Smashwords, Kobo...and shortly Nook and iBooks, but it sounds like it's still going to be another (possibly) 24 hours before the correct edition is live on Amazon. Which means roughly 3000 people got that wrong version.

(And, by the way, thank you to those of you who have been so very kind and understanding about the mix-up. My first ever mix-up, I want to point out, in all these years and all those books. )

Most of the people who pre-ordered through Amazon will not see this post, or any of my other posts on social media, so...if you should hear someone cursing my name down through the ages, it would be very kind of you to let them know what's happening. If their Kindle account is not set for automatic updates, it's unlikely they'll know to click that Updates Available button.


The last thing Jason West, an ambitious young FBI special agent with the Art Crime Team, wants—or needs—is his uncertain and unacknowledged romantic relationship with irascible legendary Behavioral Analysis Unit Chief Sam Kennedy.
And it’s starting to feel like Sam is not thrilled with the idea either.


But personal feelings must be put aside when Sam requests Jason’s help to catch a deranged killer targeting wealthy, upscale art collectors. A killer whose calling card is a series of grotesque paintings depicting the murders.


For a time he was occupied in playing shuffleboard with the buses and delivery trucks and taxis clogging the crowded streets, but inevitably his thoughts circled back to the passenger in the seat beside him.
Given how irate Jason had been at being conscripted into Kennedy’s investigation, it was odd that what he mostly felt now was a sense of letdown, even disappointment, that Kennedy would not be returning.
But wasn’t it normal that his feelings should be confused? The situation was just…so strange. All those months. And when they finally did get together…
Nothing.
Worse than nothing. It was like they had never met. Never made lov— Oh, hell no. Not that. Never had sex. That’s what he meant.
His anger faded, leaving him depressed, disheartened. What the hell had happened to change everything? He just couldn’t understand it. He was baffled.
Yeah. Baffled.
The traffic lurched to a sudden standstill. Jason’s phone vibrated. He ignored it. Around them, a few impatient drivers vented their frustration with honks, but the seconds continued to tick by. Pedestrians in every size, shape, and color crowded the sidewalk beside them, darting around the cones and sawhorses and hoses of the workmen tearing up the pavement with jackhammers. The pound of the pneumatic drills was not as loud as the silence stretching between himself and Kennedy.
In disbelief, Jason heard his own voice—hesitant, slightly strained—break the silence.
“Look. Did I…do something?”
“No,” Kennedy said at once. And that was a relief. A relief that Kennedy did him the courtesy of not pretending he didn’t understand. In fact, it was as if he had been sitting there thinking the same thing as Jason. “It isn’t you. It’s nothing you’ve done or didn’t do.”
He didn’t elaborate, though, so Jason—who already felt like he was out on a very flimsy limb—had to stretch still further.
“Because I don’t understand.” Excruciating to have to put this into words. His face felt hot, and his heart was pounding as though this was a high-risk situation. He was not used to it. Not used to…caring so much. It wasn’t that he’d never been turned down before or even been dumped. It always stung, but it hadn’t hurt. Not really. Not like this.
Kennedy didn’t answer immediately, and Jason couldn’t bear the silence.
“Is it the promotion? Are you thinking that I would somehow trade on our friendship? Or that other people might think I was trading on our friendship?”
“No,” Kennedy said, again adamant. “I don’t think that. And I don’t give a shit what anyone else thinks.”
So what the hell was it? Because he was not wrong, not imagining things. Kennedy was confirming it was over. But he wasn’t telling him why, and that really was the part Jason needed to understand. They’d talked two weeks ago, and there had been no hint that everything was not…
Was not what?
Okay? Fine? ? None of that applied. They’d had a long-distance relationship that was more like phone tag. In other words, they’d had nothing.
And kudos to Kennedy for recognizing that fact and breaking it off.
Although this was more like passive resistance than breaking it off. But whatever. Over. Done. Finito. Let it go, West. It only gets more embarrassing from here.
A couple of excruciatingly long seconds passed while he tried to think of a way to change the subject, scrabble to the solid ground of…anything, for the love of God. How about them Cubs?
The traffic ahead of them crept forward, and Jason eased off the brake, letting the Dodge roll a couple of inches.
Because I care about you, Jason. More than I thought I could.
His eyes blurred.
Jesus Fucking Christ. Was he about to cr—tear up over this? No way. And sure as hell not when Kennedy was sitting right beside him. For God’s sake.
Kennedy said suddenly, “I…like you. Nothing has changed.”
Right. Except everything.
Jason made a sound in the back of his throat that was supposed to be…not what it sounded like. Which made him angry and enabled him to get out a terse, “Right.”
“But it isn’t…practical to try to…” Kennedy was picking words as painstakingly as somebody gathering shards of glass. “It’s not enough to…build on.”
Wow. Maybe he was misremembering, but getting shot three times hadn’t hurt this much. And anyway, what the hell did that mean? It’s not like Jason had been pushing for more. He had accepted Sam’s terms. Not that Sam had really given him terms.
He wanted to say something to the effect of what he had said in Kingsfield: Whatever. It was just supposed to be a fucking date.
But of course it wasn’t just a date. Not anymore. Somehow they had managed to move beyond that never-to-be date to something more. Something deeper. And yet less concrete than even a date.
It made no sense for him to sit here like his heart was breaking when they didn’t even know each other. It was ridiculous. Pathetic.
“It’s okay,” he said flatly. “You’re right.”
He felt Kennedy look at him, but he kept staring straight ahead. He shrugged.
“I should have told you sooner,” Kennedy said. “Made my position clear.” Had it been anyone but Sam Kennedy, Jason would have said there was guilt—regret?—in his tone. “But I like talking to you.”
“Yeah. Well.” He was relieved his voice had steadied again, because inside he was a churning mess of confused emotion. Mostly pain. “I liked talking to you too.”


Neither of them had anything to say after that, and the nearby crush and crash of broken cement filled the distance between them.

Buy it!
Kobo
Smashwords
iBooks
Barnes and Noble
Amazon (but maybe you should wait until tomorrow -- seriously)
Posted by Josh Lanyon at 1:00 AM