I’ve been relaxing between projects by watching old movies. A Woman Possessed got me thinking how sometimes the kind of story you want to tell necessitates the kind of characters you write. 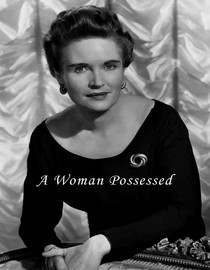 Admittedly, most of my stories are character driven, but once in a while I’ve chosen to write a certain dynamic that necessitates one character being just not as likable as my usual cast members. A Vintage Affair, for example. Or Icecapade. Or the yet to be released Lone Star where part of the plot really depends on the protagonist’s hot temper and tendency to fly off the handle. Not qualities I particularly admire, but interesting to explore (for me) in this context.
In A Woman Possessed, one of those 1950s English domestic dramas, a young doctor brings his new fiancée home to meet his neurotically possessive mother. The fiancée suffers from a heart ailment and darling Mummy is tempted to rid herself of her rival by aggravating the girl’s condition. It’s old school and uber-dramatic, of course, but it’s notable for the fact that there’s a great deal of everyone saying all the stuff you always wish characters would say in these situations but so rarely do. They talk. And they do ultimately work the situation out, although the ending sent the wrong message, I think.
Anyway, as far as characters, the American fiancée comes off the best in that she’s spunky, frank, and gracious in the face of the cold and possibly murderous reception she gets. She’s an orphan and she’s been very ill--is still having heart attacks--so her reluctance to walk away from this relationship is psychologically sound. The mother, doesn’t come off too badly because it’s her job to be borderline nutso. She’s elegant and charming and totally convincing, and as unreasonable as her wishes are, we sort of understand where she’s coming from. The least likable character is the son. His role requires a staggering lack of sensitivity to both his fragile fiancée (especially startling since he’s also her doctor) and his mother who he’s sort of avoided for the past two years he trained to be a doctor because of mama’s general over-bearingness.
The problem is, in order to get the dynamic of this story, he has to be dense as a block of cement. If he reacts like a normal bloke we won’t get this awwwwkward situation of the three of them living on top of each other with the tension mounting as the poor fiancée attempts to assert herself and the mother and household servants watching her for weakness like hungry birds of prey.
The only way to avoid the son being a jerk is to tell a totally different story. But suppose the writer doesn’t want to tell a different story? Suppose the writer simply wants to explore this dynamic and this situation and this plot?
This is the dilemma we sometimes face as writers. Readers of literary fiction tend to be a little more flexible on the issue of liability in main characters. In romance, many readers have a difficult time accepting a genuinely flawed hero.  Jerks are easier to love in real life than fiction!
Posted by Josh Lanyon at 4:48 PM 12 comments: