It's been such a very weird year. The kind of year where it you really have to concentrate on all there is to be grateful for in the midst of all there is to be worried about. But one of the advantages of focusing on gratitude is it helps with anxiety and depression.

So here are five things I'm grateful for this Thanksgiving Day. I invite you to share your own five things in the comments below.

2 - That my depression, anxiety, creative ennui (?!) has lifted and I am eager to get back to work--and excited about the stories left to tell.

3 - That everyone I love is still alive. Friends and family I most care about are so far still safe. Watching the terrifying numbers on the news each night, that is no small thing. I am deeply, deeply grateful for the health and safety of everyone I love. That includes those of you showing up today to read this post--I am very grateful that you're here and you're hanging in there.

3a - Also the promise of a vaccine on the horizon. I'm very grateful for that.

4 - Chocolate. In fact, a veritable stockpile of chocolate. Some people panic over toilet paper. My fear was we would not have chocolate when we needed it most. ;-)

5 - The Marlowe and Spenser Comedy Hour--which turns out to run 24 hours a day. Our little four-footed kooks have provided cuddles and kisses and many, many laughs during some stressful hours. Also their need for routine has kept us on schedule.

Whatever you have to be grateful for, I hope the coming days are brimming over with it. 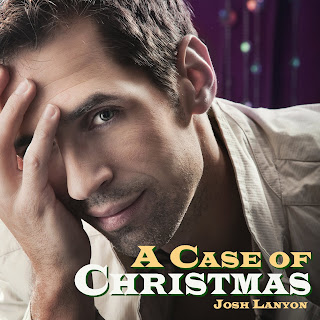 Yes, yes, I am running one hell of a lot of deals right now. And that's because I'm not planning on running many sales come December. So this is it.

What I'm doing in December is the annual Advent Calendar.  And here is your invitation to submit art, fiction, whatever to that endeavor. There are still slots left!

A Case of Christmas

The Dickens with Love

These holiday favorites have all been submitted to Chirp for a $1.99 promotion that should run from November 25 through December 24. You can almost get all of them for what one of them typically costs! 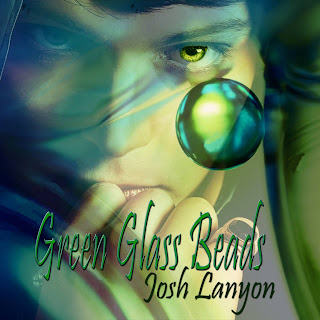 AND you know what, there's more, so maybe it's easier if you just pop over to my website.

This one is for MAINLY BY MOONLIGHT and it's aimed at the United Kingdom, Canada, India and Australia. Of course, I went ahead and applied it to the US too (and probably elsewhere, although sometimes it's hard to tell).

But anyway, it's on now and expires on the 25th.

I'm hoping to have the third book out at the end of this month, so the timing is pretty good! Seriously, even if the timing was terrible, you can't beat .99 cents. 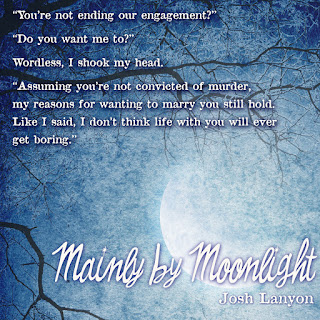 OR John Joseph Galbraith. Which one should we talk about?

THAT WAS A RHETORICAL QUESTION.

I've been making notes and working on the outline for Bell, Book and Scandal, and that means thinking through the ongoing character arcs of both Cosmo and John. I was surprised after I Buried a Witch by the readers who really did not seem to "get" John. Meaning that they did not seem to understand that John was an emotionally and psychologically complicated personality with a character arc before him.

I don't know why this always surprises me because I've noticed again and again that the very readers who claim they love difficult, complicated characters, often have a lot of trouble with characters who are indeed difficult and complicated outside of a preordained acceptable character traits bubble.

I admit it. I like writing difficult characters. I like writing characters that push reader buttons. I like occasionally making readers uncomfortable. I'm not trying to write for everyone. I'm not studying the market and analyzing algorithms. I  write what interests me, moves me, inspires me to explore and understand. That's one reason why I quit writing for mainstream. ;-) 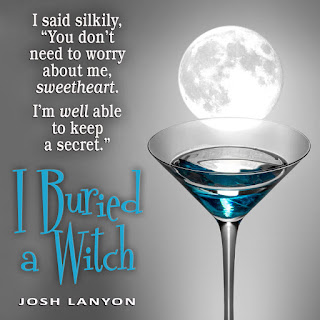 Anyway, I was thinking about John and the readers who were riled by him, and I wonder if there were some important clues that not everyone picked up on. Like, there's a big difference between what John says and what he does. John's communication style is very brusque, but his actions frequently do not line up with what he says. John talks a good distancing game, but when it comes to Cosmo, he does not actually preserve much distance.

Some of John's most important character reveals are sub-textual. But some of them are right there in
plain sight.

For example, John's not sexually controlling. He's open and willing to anything Cosmo wants to do or not do. He specifically says Cosmo should have everything the way he likes every time he has sex. And as Cosmo's sexual interests change, John goes right along with out hesitation or hitch. 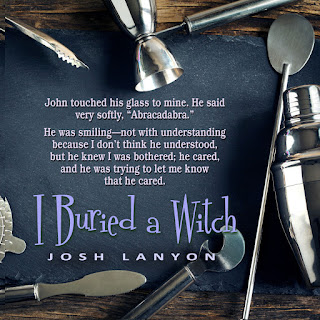 Also, right from the start--in Mainly by Moonlight--as ambitious as John professes to be--is--when it comes down to Cosmo or his big important job--even with all his (understandable) doubts and concerns about Cosmo--he chooses Cosmo.

This is a little one, but kind of key to both family dynamics and how John treats others. John backs Cosmo's position within the family hierarchy. We know (or think we know) John's not a patient guy, yet he's kind to his annoying and difficult mother and both loyal to, and protective of, his difficult young sister. He values Cosmo's input and opinions (as much or more than values anyone's--given that he is not a trusting person). Also he appears to remain courteous and respectful to Cosmo's family and friends, despite knowing they detest him.

In I Buried a Witch, John gives what he believes is an ultimatum and when Cosmo calls his bluff, he backs down, eventually settling on the fairly minimal request of please don't use magic as a first resort. (Which is fair enough from someone who doesn't like magic. ) Should he have made the original request? It's called negotiation. 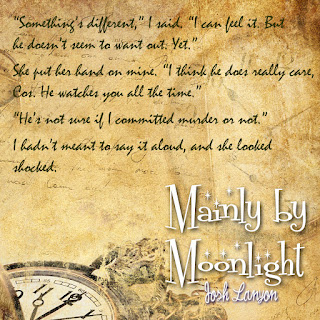 Also, as controlling as John seems on the surface, he does forgive Cosmo for trying to use magic on him--not once, but a couple of times. In fact, after his initial rage (again we only see it through Cosmo's eyes) he attempts to retreat from Cosmo. He does not attack him or punish him. He's not out to destroy Cosmo. He doesn't reveal any of Cosmo's secrets.

It's tricky because we mostly see John through Cosmo's eyes, and Cosmo feels insecure and uncertain of the relationship. Subtext is important when analyzing John. But so are Cosmo's behaviors. He repeatedly ignores John's orders and demands--other than the evening where John discovers Cosmo is a magical being who attempted to repeatedly use magic on him--Cosmo shows little real fear of anything but John not loving him. In fact, overall, Cosmo is pretty much a blithe spirit.

And finally, I'd have insisted on the pool too. :-D I mean, he did give Cosmo half the backyard, and Cosmo is a fully cognizant adult, not a tiny child to wander off and fall in the pool. 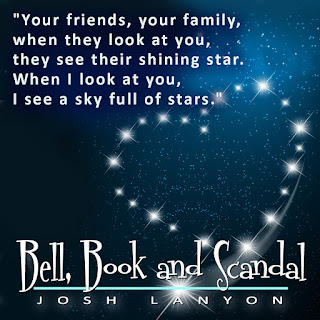 Those are my thoughts. YMMV?
Posted by Josh Lanyon at 3:47 PM 14 comments:

Email ThisBlogThis!Share to TwitterShare to FacebookShare to Pinterest
Labels: Bedknobs and Broomsticks, Bell, Book and Scandal. Mainly by Moonlight, I Buried a Witch, writing, writing life 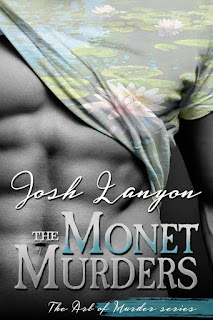 THE ART OF MURDER series

Oops! Surprise. The Mermaid Murders has already fallen out of Kindle Unlimited, so I couldn't get a Kindle Countdown Deal for that title (AND I need to list it wide again). But the following titles are Countdown Deals starting the 19th. 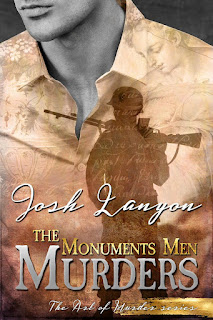 Same deal with Secret at Skull House. I wasn't able to get a Kindle Countdown Deal in the little time it has left in KU. However, Murder at Pirate's Cove goes on sale Friday the 20th 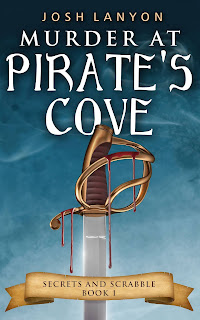 KINDLE COUNT DOWN DEALS THIS MONTH 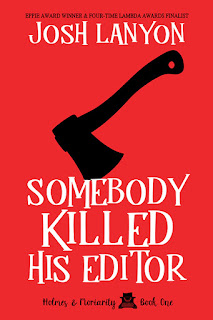 At the end of this month, most of my titles will be back in wide distribution, so if you've been aggravated by so many series being exclusive to Kindle Unlimited, good news.

But before I yank everything, I'm doing a bunch of Kindle Countdown Deals, starting today.

Here's what is currently on sale through Amazon.com.

THE HOLMES AND MORIARITY SERIES

Somebody Killed His Editor: 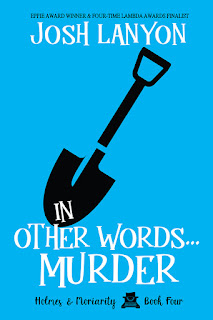 Boy With the Painful Tattoo: 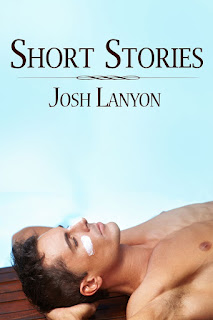 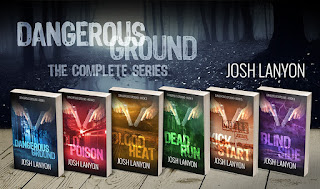 There are many more sales coming this month, so don't forget to check back! 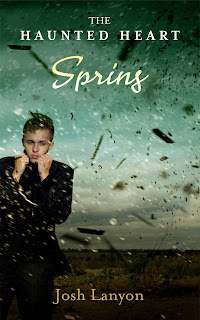 Maybe I just waited too long to tackle this one. I don't think I can completely blame it on the pandemic, though clearly that didn't help. I've started and stopped at least a dozen times. It's completely outlined. I've got whole scenes playing out in my mind. I've got the covers. I even did a couple of trailers and teasers. I tried to do a playlist. I tried every inspire-creativity trick I know, but the story and the characters just seemed to drift farther and farther away.

I've read such stupid comments about books being delayed and cancelled. As though this was something a writer did simply to disappoint and anger readers. No writer wants to cancel a book. I wouldn't have dragged this out for years, if I'd actually wanted to cancel.

In fact, disappointing readers is the last thing I want to do. I know how this feels and I hate doing it. I've had it happen to me, and when it does, I feel that exact same frustrated why can't they just write the damn thing?!

Just from a practical standpoint... The first little novella earned over 30K. Spring had about 2000 preorders. I'd already sold the audio rights on the sequel (which now have to be repaid). So there was every practical incentive to complete this project.

I don't feel the characters anymore. There's no...emotional connection. Also having waited so long, I ran into the problem of other people's expectations. It's the lesson of The Ghost Had an Early Check-out. I waited too long on that one too, and readers had too much time to decide the story they wanted--which turned out to not be the story I had in mind. And then there were the hostile comments and negative reviews because Spring had already been delayed. I'll be honest. That kind of thing is a disincentive for moving ahead with a project you're already struggling with.

And I don't doubt that that's the goal of negative comments and hostile reviews of a book not yet written. This time it worked. This time I didn't have enough faith in the project to forge ahead anyway. I read over the outline, and it's like someone else wrote it.

Anyway, my creative energy still feels fragile, so I'm only doing what really interests me, what I'm eager to work on, what I know I can and will finish.

If the time comes when I feel different about this project, when I can remember what made me want to write about Flynn and Kirk in the first place, I promise you I will. But for now, sadly, this one is shelved.