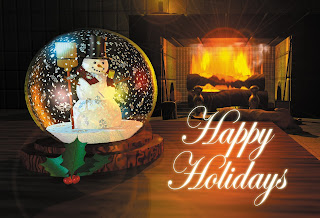 OR the winter holiday of your choosing.

Now for those of you new to the blog, this is not a super traditional Advent Calendar.  How it works is like this: every day through the month of December I try to post something of interest or good cheer. Sometimes it's just a nice photograph, sometimes it's a giveaway like print books or audio codes or...well, who knows? Sometimes it's a holiday coda.

A coda, for those of you joining us for the first time, is an ending part of a piece of music or a work of literature or drama that is separate from the earlier parts. The fact that the coda is separate from earlier parts of the story is what makes it different from, say, an epilogue wherein all the story parts are pulled together and we have a final last word on what it all meant.

The codas are all bits and bobs from my existing stories -- in some cases they're bridges to new stories and in other cases they are a final glimpse of the characters. Sometimes they are really short -- just a couple of lines. Sometimes they're an actual vignette. Sadly, there will not be many codas from me this year because I'm working hard to finish The Ghost Had an Early Check-Out in time for Christmas. So while I hope to do a couple of codas, well, we'll just have to see.

BUT last year we opened the Advent Calendar to readers like you, inviting you to submit your own holiday offering--and it turned out to be brilliant. We got artwork, we got codas, we got games and giveaways. It worked so well that we're going to do it again. You are invited to submit to the 2017 Advent Calendar. Anything related to any of the stories is welcome.  (The idea being that no one better understands what a fan might enjoy than another fan!) So if you want to submit artwork or a snippet from a scene you wish I’d written or a poem or a song or anything at all really, send it to me through my website contact page and we’ll put those into the calendar as well. (All donations gratefully accepted!)

As for why I do the Advent Calendar? It's just a way of thanking you all for your kindness and support during the year. Yes, you buy the books because you like the stories, but there are lots of stories and lots of authors out there, so I appreciate the fact that so often you choose Josh Lanyon stories. Thank you very sincerely. I truly hope you enjoy this year's calendar.

Happy Holidays to each and every one of you.

Thanksgiving is one of my very favorite holidays. For me, it kicks off the entire holiday season. Halfway through the meal, the background music changes to Christmas music, and when our guests leave tonight the Christmas lights will be shining.

So Happy Thanksgiving. I hope you have many things to be grateful for in your life. And that many more good things will come your way in the future. 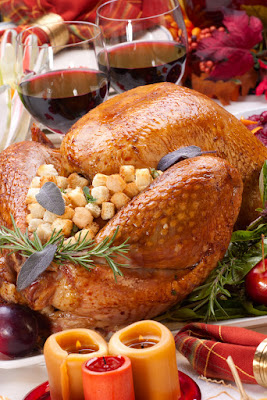 As regular viewers know, I had a very different plan for this year.

Following last year's skimpy (and largely experimental) spate of late autumn releases, I had intended to come back with a slew of long-promised sequels or installments, such as Blind Side, next book in the Dangerous Ground series and The Ghost Had an Early Check-Out (sequel to The Ghost Wore Yellow Socks).

But real life has a way of elbowing its way into the best laid plans. Starting with the SO's stroke (God, has it really been a year?!) things just didn't roll out as anticipated for 2017. I feel like I've gone on enough about this stuff, so I won't rehash, but in the words of the philosopher known as Siri... Recalculating.

I've got two months left and I need to be realistic. I HATE THAT. But still.

Right now I'm working on the rewrite of Murder Takes the High Road, a standalone cozy mystery novel for Carina Press due out next April-ish. For reasons that have zero to do with the book, it's taking me a hella long time to finish this story. This project has to take precedence over anything else.

Once it's done, I'll begin The Ghost Had an Early Check-Out. Why this book and not the much-delayed Blind Side? Because, simply, I ran expensive print ads on it in mainstream mystery mags.

That pushes Blind Side back again--this time all the way back to next spring because I'd rather be slightly late on the two remaining projects than hugely late on everything for the next four months, which is what happens if I try to force Blind Side out.

It's complicated, my friends.

Advertising, narrators, editors, translators are lined up for these projects, and missing deadlines, switching things up, have consequences for others as well as myself.

That said, here's what I promised in September:

"Halloween is Murder" (a short story)
Murder Takes the High Road (although it doesn't come out until next spring)
Blind Side (now pushed back to May 31st)
The Italian translation of The Monet Murders
The Ghost Had an Early Check-Out (sequel to The Ghost Wore Yellow Socks)
In Other Words...Murder (the fourth Holmes & Moriarity)
So This is Christmas audio book (narrated by Kale Williams)
If Only in My Dreams - print collection of all my Christmas novellas

So far the only thing being seriously shoved back is Blind Side. The rest of that happened, is still on track, or is only delayed by a few months.

I feel confident enough, that I'm going to go ahead and list TGHaEC-O and IOM on Smashwords (which includes Kobo, B&N and iBooks) for pre-orders. No Amazon pre-orders because Amazon took my pre-order privileges away for a year due to missing the date on The Monet Murders. *snort* Not sure how punishing readers by not allowing them to take part in pre-order pricing is teaching me a lesson, but whatever, Zon.

Still on track for next year are The Magician Murders (Book III in the Art of Murder series) and Haunted Heart: Spring. But (along with Blind Side) that might be it for next year. The SO and I have our non-fiction project to work on, and that's going to take several months, so...next year might not see a lot of new work from me.

There. I've said it.

I feel like it would be better to under-promise and over-deliver rather than give in to my normal optimism. Then maybe we'll all be happily surprised. Or not. But at least I won't be creating unnecessary stress for myself by setting up a terrifying gauntlet of deadlines.

I know it's risky in these days of multiple monthly releases, but oh well. I didn't become a writer so I could make a quick and easy buck. I want to tell stories that entertain, engage and, yeah, maybe to some small extent educate. I want--need--to enjoy writing them as much as I want readers to enjoy reading them. That's been my goal from the beginning--and I don't see that changing.
Posted by Josh Lanyon at 1:00 AM 59 comments:

Email ThisBlogThis!Share to TwitterShare to FacebookShare to Pinterest
Labels: in other words...murder, the ghost had an early check-out, writing life
Newer Posts Older Posts Home
Subscribe to: Posts (Atom)