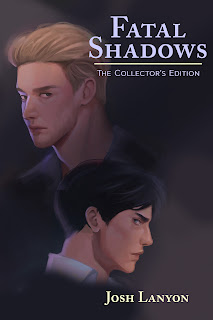 Some of you will recall my January 2021 post regarding the fate of the 20th Anniversary edition of Fatal Shadows. In that post, I revealed the cover art, shared a bit of what would be included in the collection, and tried to guestimate when I might eventually release the book.

Wellll, obviously it took longer than I'd hoped, but the final coda has at last been written (it's almost seven thousand words long, the length of a short story)!

In addition to illustrations, all the AE character interviews and codas have been gathered, and we have Chapter One of Fatal Shadows rewritten from Jake's POV. There's also an abandoned short story (from Jake's POV) that I started for the Millivres Prowler Group way back in the day.

All in all, there's about 30,000 words worth of bonus materials! Which, if you're a longtime fan of the Adrien English series, is a lot of fun extras.

The book is now with my editor and after that, it goes to the SO for formatting. It will only be available in print--there is no plan for a digital version. The idea is to put it into hardcover. Hopefully, that's not cost prohibitive. We'll see.

I'm not doing preorders. I'll let you know when the book is available for purchase, which hopefully will be within the next couple of weeks.

So This is Covid 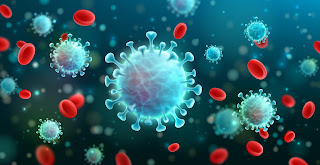 Which is probably inevitable with this variant if you or your SO works outside the home.

Part of it was probably a little bit of mistiming. I caught a light cold Christmas Eve. I was recovering from that, when there was a COVID scare (well, not a "scare," given that one of his coworkers did come down with it) at the SO's work, and we decided to get boosted immediately.

So I missed New Year's because, yep, COVID.

Which I kept insisting was just a bad cold--because that's what it feels like. A very bad cold. I did sort of suspect however, especially when the SO's version of the very bad cold came with fever and aching joints, and was over in three days.

**Obviously, OBVIOUSLY, I was socially isolating through all of this. Regardless of chances I might take, I'm never going to take a chance with someone else's health or safety. Let alone the health and safety of people I love.

Up until we caught it, I assumed that these break-thru cases occurred because people were not taking the same precautions they'd originally taken. I mean, I'd stopped spraying everything that came through the door (including the dogs' paws) with disinfectant. I'd stopped wearing a mask when outdoors.  I went out to lunch. I went to Catalina for a week and did all the things.

As we understood more about the virus, we adjusted our behaviors accordingly. But we were still super careful.

The problem is, we can only control our own behaviors. We learned that one of the SO's unvaccinated coworkers lied--continues to lie--about being tested. Some of the customers who walk into that business don't wear masks and throw a screaming fit when they're asked to put a mask on. I'm going to assume they aren't vaccinated. The madness continues.

Anyway, my cold went on and on, people kept asking me if I was tested, and finally I thought why aren't you getting tested? So I got tested and yep. Bingo.

If I hadn't already been getting over a cold, I'd probably have recovered a lot faster. As it was, I had a couple of miserable days and then what feels like forever of lingering ickiness. Today I feel pretty good. I still have a cough, but it's way, way better. I never had any alarming symptoms. I didn't have aching joints. I was never short of breath. I didn't lose my sense of smell or taste.

Had I not been fully vaccinated, it could have been quite a different outcome. Especially since I'm prone to respiratory infections. Had we been boosted earlier, we might not have been sick at all, and that would have been the best possible outcome. 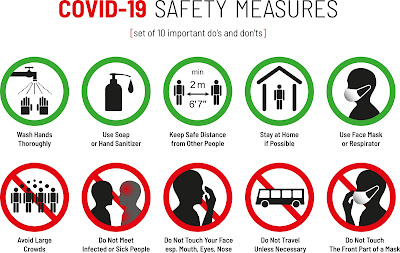 Email ThisBlogThis!Share to TwitterShare to FacebookShare to Pinterest
Labels: #writinglife

First there was the light but might-this-portend-worse-things? cold. Which meant stay home and don't risk getting anyone else sick. Which, frankly, isn't just pandemic protocol, it's the normal thing we all have always hopefully done.

This sneezy, breezy, wheezy cover girl period was followed immediately by getting our booster shots (there was a COVID scare at the SO's work) and my usual (bad) reaction to that.

Does a bad reaction to the booster mean you would get really sick with COVID or your immune system is in full working order? I don't know. And I'm not sure I want to think about it.

Is it a cold or COVID?

Anyway, no sooner did I recover from the booster reaction than I got sick again! Sore throat, cough, the whole shebang only x 10. What. The. Hell.

Which is where I am right now--coming out of four days of feeling like utter shite.

But you know what? IT'S OKAY. I've only actually lost a couple days work--THANK YOU FOR MY NEW IMPROVED SANE SCHEDULE WHICH ALLOWS ME TO BE SICK WITHOUT FEAR--and I'm still feeling happy and excited and hopeful (partly because I continue to resist watching the news which, judging by the tiny peek I took a couple of days ago, is pretty damned dire).

My current plan is to finish Hide and Seek, do the final Adrien English coda for the Fatal Shadows Collector's Edition, and then dive into The Movie-Town Murders.

May I say here that my research for TMTM is frankly disturbing. Snuff films? Really? Where the hell--and hell is the right word--did I come up with that one? I mean, it makes sense, given past events within the series, but still. It's troubling. It's the stuff of bad dreams.

Anyway, I know I'm not the only one under the weather, so here's a bit of Jacquie Lawson charm and comfort to counteract. 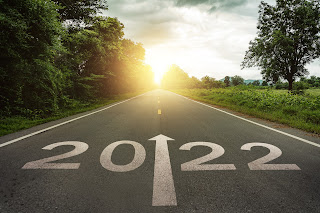 But at least a world we're better prepared for. ;-)

I've gotten a lot of worried emails and messages over the "cancellation" of The Movie-Town Murders on Amazon, so let me reassure you, the book is NOT cancelled. I'm working on it right now. Or at least, yes, it's cancelled on Amazon, but the book is still coming out! I'm aiming for the end of February.

So, if you preordered anywhere other than Amazon, your order is still right where you left it. (And you got it at a discounted price too, so good for you!) If you preordered through Amazon, you'll have to purchase the book when it goes live. That's all.

Well, let's talk about that.

I'm feeling creative and energetic and even optimistic again, which is promising. More than that. It's a huge, HUGE relief. When you make your living from your creative output, burnout isn't an inconvenience, it's a catastrophe. I've struggled with burnout before, but never like this, and yes, there were extenuating circumstances that would surely never repeat themselves, but still. I can't risk anything like last year ever happening again.

So I'm going to try something new, and keep everything as loose and flexible as possible. As of right now everything looks good. I've tried to make sure there's plenty of room between projects. I'm not going to list any additional preorders, because I don't want another scheduling trainwreck like last year. But just because something isn't listed on Amazon, doesn't mean it's not going to happen.

That said, I do plan on a much slower schedule this year.

I do want to point out, though, that even with all the disasters and delays of last year, it was still my most productive year in the last five or so. I put out four novels! That's not bad.

Right now, I'm not looking beyond next summer. If I can get through the next six months and stay on schedule and still feel creative and energetic and optimistic, well, there are plenty of possibilities for the fall. But fewer promises mean fewer disappointments. For everyone.

So that's where we are! I hope you're also looking forward to 2022 and making plans that will help you turn your dreams into reality. The last twelve months were tough. Here's to turning the page.