I've been getting questions about whatever happened to Fatal Shadows The Collector's Edition.

So, if you don't know, I had hoped to release a special hardcover print edition of Fatal Shadows to celebrate its 20th Anniversary. My dear pal Dal Maclean wrote the Introduction and my dear pal Nicole Kimberling wrote the Afterword and I commissioned six original pieces of artwork to illustrate. All the AE codas and interviews are included.

SO WHAT THE HECK HAPPENED?!

Well, the artwork ended up taking a bit longer to complete and we missed the initial deadline. THEN, since we had already blown past the deadline, I had the brilliant idea of doing one final coda for Adrien and Jake to finish off the collection.

Which I still think is a good idea and I still want to do, but in the meantime I'm now immersed in Mystery at the Masquerade, so I'm trying to save a little window between finishing Masquerade and restarting Bell, Book and Scandal to do ALL THE THINGS including finishing the coda for the collector's edition.

It's still happening! I promise.

In the meantime, how's about a little cover reveal? The cover artwork is by Unmeiartist. 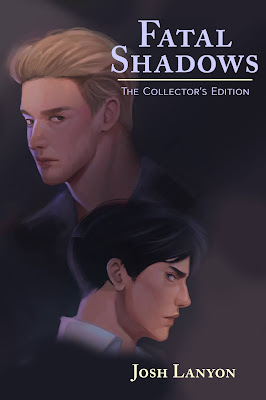