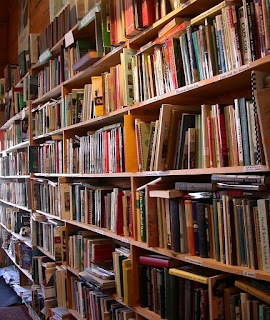 Welcome to another day of the Advent Calendar! We have more fresh and delicious fiction from talented Sarah Atkinson. She's chosen to revisit the characters from Stranger Than Fiction, but not the characters you might think. I love this unexpected view of the characters and their possible fates . Perception is everything. ;-)

Can a murderer ever be a hero or a good guy? It was a question he was often asked at book events and he always skirted around the issue, turning the question back on the questioner. Once (and this was something he was careful never to mention in front of an audience) he was pretty sure someone had thought he was a killer. A killer? No, not unless being a killer of passion counted.  Even now, two and a half years later, as his car made its way along the desert highway, bringing him back to the scene of his crime, Karl Hagan could feel the heat rising in his handsome face as he thought back to that day of disaster and hope.

It had been summer then, a hot, dry summer made for swimming and long, cool drinks of beer. Karl was keenly aware of his disastrous social skills: in spite of being in the football team, he had always found it hard to form friendships, let alone a partnership, so he had gone over and over the words he would say.  He remembered going over to Ethan’s house intending to make his declaration but Ethan had seemed strangely alarmed – scared almost – to see him, and then Michael had turned up. Frustrated, Karl had left. The following morning had brought him renewed hope and determination and he’d sallied forth only to forget everything he had planned to say, instead he had blurted out the words: “We’re the only two queers in 500 miles.” It still made him cringe. How could he have been so crass? How could he, a writer, have uttered something so utterly unromantic, so lacking in sophistication and (as he later fortunately discovered) so factually incorrect?

Although he had been apprehensive on the journey there, the signing at Red Bird Books  & Coffee went well.  The turnout, for a town the size of Peabody, was surprisingly good and he was pleased to recognise members of the Coffee Clutch Writing Group among those queuing to buy. The content of his latest best seller was similar to the writing he’d shared with the group, he wondered if fame made the words more palatable. Ethan was positively chipper, whether it was the spirit of Christmas present or the presence of the archangel Michael, Karl was unsure. The coffee, unsurprisingly – yet reassuringly – was terrible. A heavily pregnant Erin, who served him, was still not quite able to look him in the eye… The season of good will led to an invitation to join the three of them and Erin’s partner for dinner. He declined, citing a prior engagement. 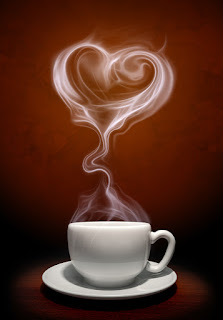 At last he was on his way to his final destination and following the exact route he’d taken after Ethan had rejected him that hot summer day. Driven by embarrassment and self-loathing, he had avoided the noise and cheer of Denny’s and headed for The Drifters to drown his sorrows. Now, on a crisp winter’s eve, he again turned left before the railroad crossing, then drove down the narrow road to the small white building. True to form, there wasn’t a Christmas decoration in sight, but a blue neon cocktail glass pouring bubbles lit up both the sky above the bar and Karl’s heart.

Eager steps took him across the chilly parking lot towards the door.  Joyfully, he slid past the leather-clad bikers gathered near the jukebox, skirted the small tables occupied by plaid shirts and headed for the bar and the barman who had his back turned. This time, with no rehearsal, social misfit Karl Hagan got the words right. They were short, sweet and delivered with love: “Babe, I’m home.”  George - the man who’d disproved his statement about there being only two gay men in 500 miles, the very day it was uttered – turned around, smiled widely and leaned across the bar to receive his kiss.