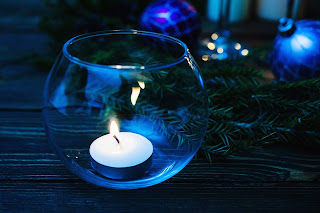 Good morning! It's Monday, but that's okay. Grab a cup of coffee or cocoa. We have a bit of fresh fiction for you from the wonderful, witty Haldis Grummel.

It was the rumble of an automobile and not the melodic jingle of sleigh bells that disturbed my enjoyment of a steaming cup of wassail and my book, surrounded by my paltry attempt to recapture my memories of Christmas magic. I indeed was expecting someone, but not yet, and certainly not by automobile. I rose quickly and started to extinguish the candles throughout the room and reaching the last one was suddenly arrested by the sight of a bead of wax spilling over the side like a drop of blood, deep dark red and viscous. I was so hungry. As I heard the slamming of two car doors, I blew out the candle and retreated into the darkness.

The front door creaked open letting in a cold December wind. A single set of footsteps approached my sitting room and a single person entered. The stranger lit a match and held it out in front of him. He noticed the candle on the table beside him, held the flame to the wick, and then lifted the candle to view the room. The sparkle of the silver thread in the dark blue bows decorating the room glittering in the candle light. Midnight and moonlight. What my life had become.

“Wow. This certainly looks fest…”, he broke off as he turned and saw he was alone. “Damn it, Mike. I guess I should have expected that,” he muttered under his breath.

I watched as the man moved farther into the room, praying that I would remain hidden from all human eyes, nothing more than the figment of a child’s imagination. I still possessed my magic from before I was turned, though I needed to replenish it every year by feeding from another Elf. I did not feed from humans. 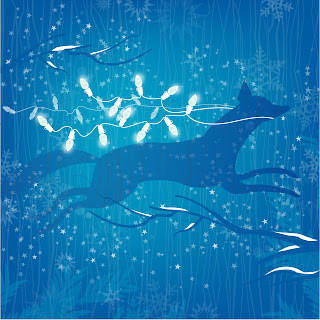 Every year, on this night, he came to me.

And every year, on this night, I could see him. Be with him. Finally, feed from him.

The man approached where I had been sitting and felt my still hot cup. He then lifted the book. He put down his candle and started flipping through the pages. He replaced the book and picked up my old Elf hat, the small silver bell at its tip tinkling softly in the still air. The man laughed. A small laugh very like the small bell.

Memories of my life before flooded me at the sound. Hot cocoa and peppermint and gingerbread.  Arctic winds and falling snow, reindeer and sleigh bells jingle jangle.

The entrance of the second person, most probably ‘Mike’, brought me back to the present. He was a little larger than the first man and he moved like a hunter. This man was a Slayer. I wrapped my magic more firmly around me, seeming nothing more than a far off hymn on a cold winter’s night.

“Anything?”, asked the first man.

“Well, this drink is still hot so he can’t have gotten far. Oh, and look what he was reading,” He held up the book again. “A Visit from St. Nicholas. I never would have thought of vampires celebrating Christmas. Just look at all this stuff. This is someone who really likes Christmas. Even if it is a bit somber.” As the first man was speaking, he had moved much closer to where I stood frozen.

“Barry!”, Mike hissed out what sounded like a warning. I had the feeling that he knew, somehow, that I was here.

“What?”, Barry asked, suddenly looking around him in fear and reaching into his coat, for a weapon perhaps. “Do you think someone’s here?” He retreated back toward the door, picking up the candle on the way.

Barry just stared at him for a moment. “A snow drift? Are you saying we’re here to slay Frosty the Snowman?”

I could barely hold back the peal of laughter that wanted to escape my lips. I loved that song about a snowman come to life by Christmas magic to play with the children. I missed children. Seeing their joy on Christmas morning. I missed mornings. 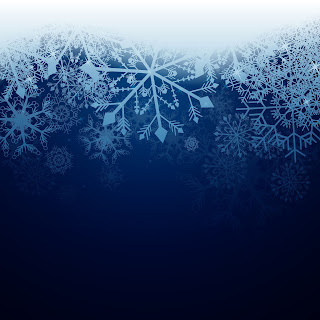 “Don’t be ridiculous,” said Mike, though he too looked like he was trying not to laugh. He failed. He laughed, shaking his head. “Ok, I admit it. I don’t know what’s here. Honestly, I can’t even tell you if the reports I’ve heard even add up to a vampire.”

“Let’s get out of here,” Barry said. “It’s Christmas Eve. We might make it home in time to see Santa Claus come down the chimney. I might even let you open your present.”

“Yeah, ok,” Mike laughed. “If this guy is a vampire, I’m sure the only thing he’ll be able to bite tonight is Santa.”

He did not know how right he was. It was all I lived for.

I waited until I heard the motor of their automobile fade into the night before I moved. The man, Barry, had left the candle on the table where he had found it and I lit a few more to brighten the room. I sat back down in my chair and picked up my book. And again froze. And smiled. I could hear sleigh bells.

I felt him appear beside me, by the fireplace. He stood there in his blood red coat with white fur trim, black belt and gold buckle. There was a twinkle in his eye, a half smile playing on his lips.
“Have you been good this year?”, he asked me.

He grinned at me, unbuckled his coat and let it slip to the floor.

“Come here and get your present.”

I dropped the book and stood. The candles flickered. I slipped on my hat and  walked into his embrace to the sweet memory and music of sleigh bells.