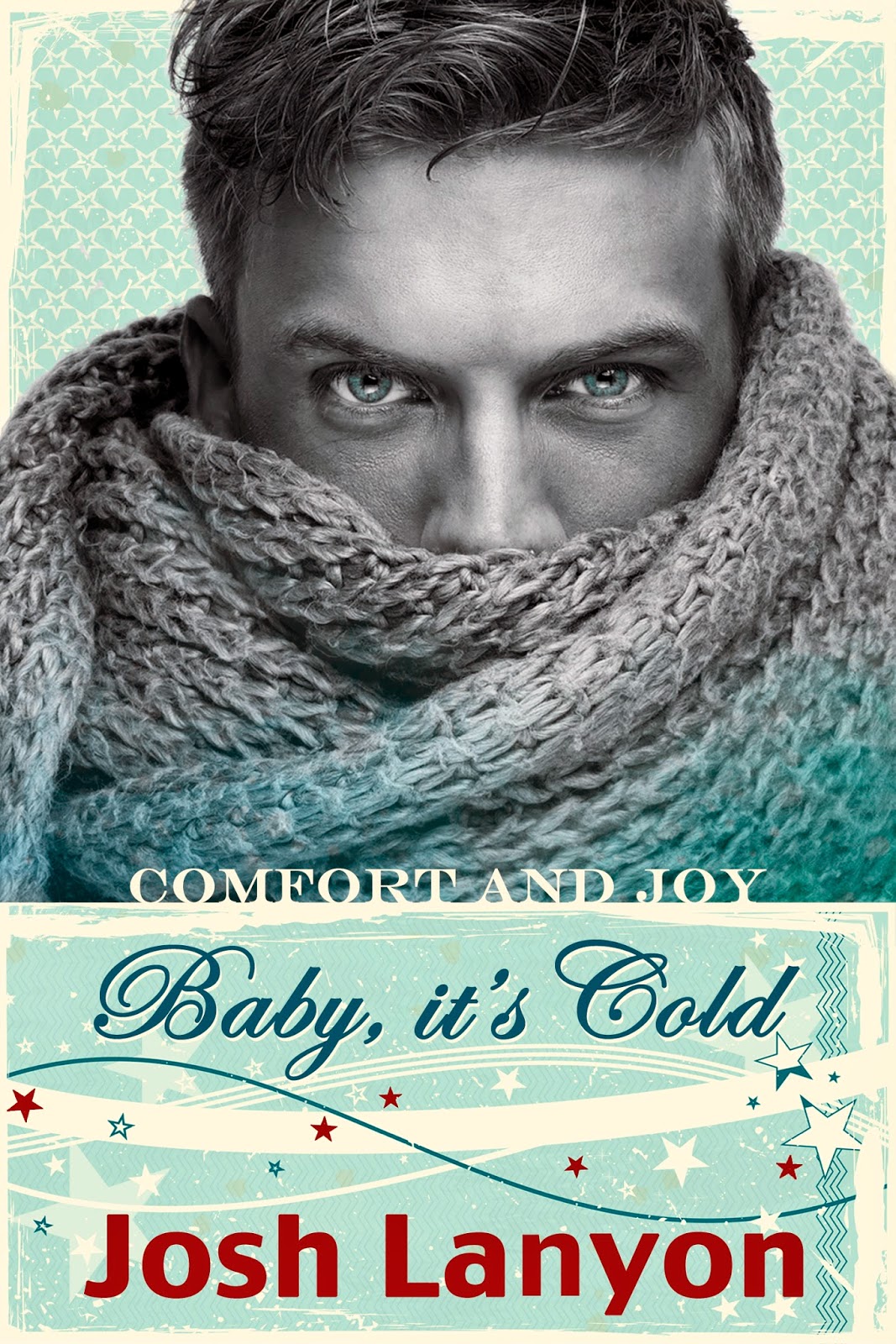 Coming this weekend. "Baby, it's Cold" is part of the Comfort and Joy anthology. Yes, you will be able to purchase it on its own, but this is a really heartwarming and delightful anthology with stories by L.B. Gregg, Harper Fox and Joanna Chambers (three of my very favorite authors), so if were you, I'd buy the whole thing.

Before you ask, no, it's not available for preorder. The book launches on Sunday (Santa willing and the crick don't rise).


Talk about Kitchen Nightmares! TV Chef Rocky and Foodie Blogger Jesse have been pals forever, so it should have been the most natural thing in the world to kick their relationship up a notch. Instead, it turned out to be a disaster. But Christmas is the season of love, and someone’s cooking up a sweet surprise…


I was putting the bottle of champagne in the freezer when Rocky said from behind me, “What are you planning on cooking?”


I couldn’t quite hide my jump, but I managed to say calmly, “It’s a surprise.”


“Well, always with you. But what are you hoping to cook?”


His green eyes lit up. They almost glowed.


“It’s practically the Feast of the Seven Fishes.”


We grinned at each other and for a second it was like old times. “You know,” I said, “you’d have been welcome tonight. We were friends a lot longer than we were whatever we were. Mama was saying yesterday it won’t feel the same without you there on Christmas Eve.”


“Let alone without you there.” Rocky’s gaze was curious.


“Because of this mysterious romantic dinner Poppy was paid a fortune to cook.”


Rocky snorted. He had changed his blue flannel shirt for one of red and white plaid, and he had shaved. He smelled of soap and aftershave. But then he believed he had company coming.


“Believe what you want to.” I turned away and began hunting for the bowls and pans and spoons I’d need. Rocky watched for a few seconds and I tried not to get self-conscious. I’d known him half my life, so it really didn’t make sense that he could make me nervous just by staring at me. But he could. In fact, that had been part of the problem between us. All those years of easy companionship had vanished like sugar in water once we’d tried to take our friendship to the next level. It had been a big disappointment to both of us, I think. We should have been great together. But somehow it had been worse than starting from scratch.


“So how’ve you been?” Rocky asked finally, going to the wine rack.


Rocky studied the wine labels, selected a bottle, brought it to the counter. I moved away, filling a pan with water and turning up the stove burner.


Rocky poured a glass of white wine and leaned back against the counter studying me.


“You’re getting it all. Starter to sweet. Okay? Poppy picked the menu.”


“So then he’s delirious?” Rocky’s expression grew earnest and concerned. “I had no idea he was so ill.”


I laughed, set a glass bowl over the pan of gently simmering water, and dropped in broken pieces of semi-sweet chocolate. I’d done some of the prep work at home so I wouldn’t run out of time or get distracted and forget some vital step. I’d figured Rocky would probably hover. Expecting a chef not to hover when you’re preparing a meal is like asking a boxer not to take a swing. I added the diced butter, a pinch of salt, and left the mixture to melt while I set about pressing sponge fingers into the walls and bottom of a deep earthenware dish. The dish—like practically every other piece of crockery in the place—was decorated with pine cones.


I nodded. Did some more pressing. The sponge didn’t stick very well. I gave up and moved to the stove, gave the chocolate and butter a stir, checked on my coffee. I removed the pot, added sugar, swirled the mixture in the carafe. Some of the liquid spilled out the spout. Rocky opened his mouth, then closed it.


I remembered I had to add the Vin Santo and I hastily set the coffee aside to scramble for the wine—trying all the while to look like nearly forgetting the wine was all part of my master strategy.


I found the wine. Rocky watched without a word as I dived past him to grab the corkscrew.


I got the wine open, and splashed some of it into the melted chocolate. Rocky cleared his throat. I stirred the chocolate and wine, glanced up at him.


“I got it.” I grabbed the coffee pot and poured the hot, sweet coffee over the sponge which was once again beginning to peel from the walls of the dish. I pressed the soggy sponge back into place, managing not to yelp at just how fucking hot the coffee was.


I snatched up a potholder and removed the glass bowl from the pan, drizzling chocolate all over the coffee-soaked sponge. Cautiously, I smoothed the chocolate out to the edges, trying not to tear the sponge to pieces. When I’d managed to cover the sponge with an even layer of chocolate, I set the dish aside to cool and wiped my forehead.


Finally the sponge was sticking to the walls of the dish, so that was something. I found the carton of eggs and snagged two small bowls. I cracked a couple of eggs.


Rocky made an amused sound. I looked up. “That you do with flair, I gotta say. Always.”


“Ha.” Me and Audrey Hepburn. But cracking an egg with one hand was one of my two party tricks. The other was flipping pancakes. Well, there was a third, but it had nothing to do with cooking.


I separated the eggs, whites in one bowl and yolks in another. I had Rocky’s full attention now. Well, I’d had his full attention from the start, but now I had his considering appraisal.


“Egg whites in tiramisù?” he asked.


“I know it’s not traditional, but this is the way my mama makes it.”


“Unfortunately now I can’t let you leave this cabin alive.”


“With you cooking, my chances were only fifty-fifty anyway.”


“Okay,” I said. “Enough with the jokes about my cooking.” But it felt natural, comfortable, joking back and forth like we used to.


Rocky grinned back and swallowed a mouthful of wine.