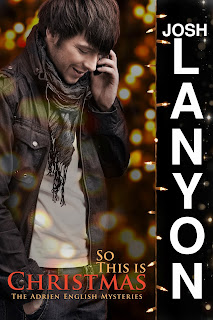 Today we're giving away a complete set of the Adrien English audio books -- narrated by Christopher Patton -- to one lucky viewer. Er, listener.
This particular gift was donated by Kim in the Goodreads group, so thank you very, very much to Kim.

Share a thought on the Adrien English series in the comment section below to be eligible for the random selection process.

And in the meantime, here's a sneak peek at the new Adrien English novella, So This is Christmas.

If all goes according to plan, this will be out New Year's Day weekend.

“What the hell just happened?” I asked the universe.


“You’re talking to yourself again,” the universe replied, pushing open my office door.


Okay, it was Jake, but he was kind of my universe.


For a guy who’d had less sleep than me, he looked unfairly refreshed and vital on a damp and drizzly Monday morning. He wore boots, jeans, a tailored white shirt and a brown tweed blazer, which brought out the gold glints in his hazel eyes. His blond hair was silvering at the temples and just a fraction longer than he used to wear. He was still hard and fit, but he’d lost that gaunt, haggard look he’d had six months ago when we’d met up again after two years apart.


In fact, he looked healthy and relaxed. Like he’d really spent the last few days on vacation instead of the family holiday from hell.


“Hey,” I said, by way of greeting. I won’t say I actually fell into his arms, but I was pretty happy to see him.


“Hey yourself,” Jake replied and kissed me, the warm pressure of his mouth firm against my own.


Hard to say—and it was a theory I planned on testing a lot over the next forty years—but I didn’t think I’d ever get tired of kissing Jake.


“Jesus, I missed you.” He smiled into my eyes.


“I got used to spending all day every day with you.”


I said regretfully, “If only it paid better.”


There was definitely a sparkle in his eyes. “Well, I might have some good news on that front. Are you ready for lunch?”


“Is it?” Jake glanced at the clock on my desk. His dark brows rose in surprise. “It feels a lot later.”


“Everything okay?” He took a closer look at me. “Is Natalie okay?”


“I think so. I hope so. Actually, why don’t we get a coffee or something? I need to get out of here for a little while.”


True, I’d only been in there about five minutes.


His brows rose. He said, “Sure. You want to walk or you want to take a drive?” 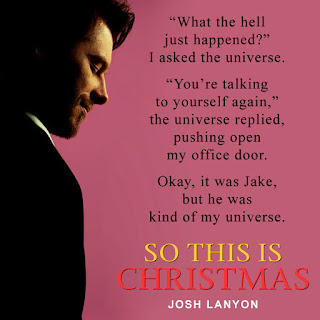 When we stepped outside the bookstore, the rain had softened to a light, shimmering mist. More like holiday décor than actual wet. Christmas is the only holiday I can think of where it continues to feel like holiday-in-progress even the day after. Maybe because people were still bustling around with heavy shopping bags, and the Eagles were plea-bargaining from storefront speakers.


If not for Christmas, by New Year’s night…


Window displays were filled with fake snow and glittering lights and toy trains and anthropomorphic stuffed animals drinking coffee and showing off engagement rings. Who knew how much penguins relished that holiday bling?


Everyone who wasn’t trying to park or find their car was in a festive mood. And it was contagious. As in, I needed to remember to take my vitamin C when we got back.


“Funny how cities have their own smell,” Jake remarked. “ just didn’t smell like .” He casually dropped his arm around my shoulders and I smiled at him.


It’s not like I needed the physical proof of PDAs, and frankly Jake’s willingness to put his arm around me or hold my hand in public meant as much to me as the actual act. But I can’t deny that warm weight on my shoulders felt good. Right.


“Thanks again for going with me,” I said.


“Not like it was a big sacrifice. I like being with you. I never figured on seeing , so that was actually kind of nice.”


And kind of exhausting. Or maybe that was more my take than Jake’s. I’d been the one to push for coming home early.


“If we were to travel somewhere for a real vacation or…something, where would you want to go?”


The arm around my shoulders jumped as he shrugged. “Never thought about it. Kate always wanted to go to .”


I glanced at him. His smile was a little wry, his expression distant. He almost never talked about Kate or their marriage, and I understood that this was out of loyalty to her. That loyalty was just one of the many things I liked about him.


I looked down, smiling, and his arm tightened in a quick squeeze.