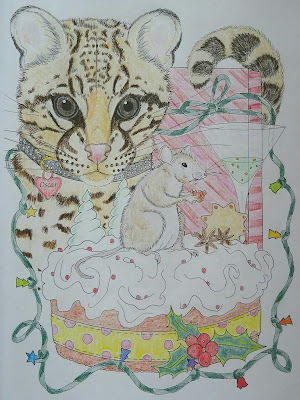 Today's collaboration from Calathea and KC is doubly delightful (just like our contributors)!

Through a thick layer of fear and recent disappointment Oscar smelled the feral scent of the mouse. It had been taunting him since he and Mistress had arrived the day before and now sat somewhere in the wooden structure, laughing at him, no doubt, and he just couldn't get past the obnoxious human in front of him. If the silly man could just step aside to let him by, everything would go nicely. But, no! The fool got it into his head that he would be courageous and stand his ground.

Maybe if he swatted a little at the man's trousers he would move? No such luck. In a misguided effort at bravery (should be called stupidity, really; who had fangs and claws here?), the man grabbed a stool and raised it as if that could ward Oscar off. If he hadn't been focused on the hunt, Oscar would have been tempted to show him what's what.

The little rustle of fur and clicking of tiny claws on lacquered wood made him bunch his hind legs for a powerful jump onto the bar.

And that, of course, brought another man to the scene. This one smelled of valor, which was the worst case. They tended to do stupid things. What did he think he'd achieve with his jacket in his hands? Oscar growled in frustration. He was so close. He could almost taste the delicious mouse flavor. Such a sweet little morsel, tender and savoury…

With a mighty bang the side entrance door flew open.


From her hiding place, the mouse watched as the big old kitty was dragged away. She snickered, grabbed the cake crumb she had come for, and hurried back home.
Posted by Josh Lanyon at 1:00 AM

Email ThisBlogThis!Share to TwitterShare to FacebookShare to Pinterest
Labels: advent calendar, fiction, The Dickens With Love