DO YOU HEAR WHAT I HEAR - Simple Gifts 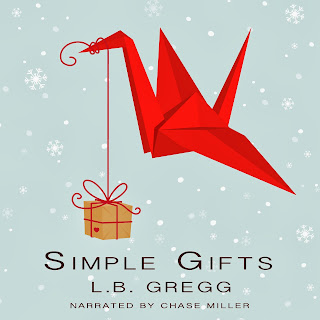 We interrupt the codas (we'll resume on Monday) to bring you a holiday giveaway. LB Gregg and I thought we would get together and gift a few of copies of Simple Gifts and The Dickens With Love audio books. There's nothing nicer than listening to an audio book as you labor long over those holiday chores. :-)

We're each giving away 5 copies, and all you have to do to be eligible for the giveaway is read the excerpts and comment on both blogs.

So without further adieu, an excerpt from one of my very favorite LB Gregg stories, Simple Gifts.

A former ward of the state, Jason Ferris is fiercely protective of his carefully guarded private life. When he's felled by a rogue lawn ornament at a Christmas party, Jason finds himself in the care of his first and most devastating love-- dark, dangerous, and equally damaged Lt. Robb Sharpe.

Newly returned from years away in the military, Robb's homecoming isn't exactly the stuff of fairytales. Now thrust together after a ten year hiatus, Jason and Robb discover that perhaps some things are worth waiting for.


“What?” Robb closed the distance between us and I caught a whiff of spice, pine, and wool. He smelled like a lumberjack, not a soldier. He’d left his parka down in the bar, and his sweater sleeves were pushed to his elbows, his shirt collar lay open, and the sight of his pale Adam’s apple had me biting my lip.


His finger brushed the back of my hand and I fumbled the key. Sick or nervous or not, the fleeting contact snapped across my skin like an electrical shock. His touch thrilled me.


I stared at his fingertips, familiar yet strange, and the air between us shrank until I couldn’t breathe to speak. Honestly, with a single stroke, he robbed me of thought.


I pulled away, but he said, “Hey. It’s okay,” in a disturbingly husky voice that I recalled too well. He took the key from my palm and I almost fell down the goddamn steps. I wanted to bolt — living up to his expectations — but he grabbed my borrowed shirt in his fist and my heart fluttered against his knuckles. His breath warmed my cheek. “Steady.”


A smile hid inside the rough tones of his broken voice and the sound eased my troubled mind while stimulating other less troubled areas. I knew that voice. I’d heard it before — in the dark of night, in the back seat, under the stars, in the boathouse, in his bedroom, behind the bleachers. And I’d hear him say steady again in the dark tonight, as I lay alone in my cold bed.


And, bang, I knew why he wanted to see me. He still wants me. He hasn’t let go, either. He came to see me.


I would have stumbled a second time, but Robb had me. Jesus, he had me good. “You need to lay down.”


I really, really did, but I could not for the life of me move to unlock my own front door.


“Yup. Fine.” I squeaked and he let me go. Robb fit the key into the lock and I stifled a groan.


What the hell kind of drugs had they given me at that hospital? I swear I’m tripping.


The sound of my apartment door swinging free sobered me. “No, wait! My cat—”


In a flash, Norm vanished into the stairwell, but that was the least of my worries.


I froze at the threshold of my home, not that Robb noticed. He wandered in, face tipped heavenward to better see the strange beauty of my apartment’s contrived night sky. Above his head paper starlight shimmered down from a black-lit galaxy. Orion, Sagittarius, Ursa Major, Canis Minor, Scorpius, Gemini — the constellations hung in painstaking precision, glowing on purple pinpricks, lighting the darkness.


Accurate and overly detailed, I’d crafted every star, made each scrap of paper and creased every fold. The project had taken years but, Voilà, origami universe.


Robb wandered, and the stars led him through the apartment, straight toward my bedroom as if they guided a wayward captain home after years at sea.


I shook that idiocy from my head and on leaden feet I trailed after my overnight guest. Hot blood colored my cheeks. “I know my apartment is a little odd.”


“No.” He turned to look at me and I banged into his chest. “Did you make all of these?”


“I swear, the sky looks exactly like this in the desert. Clear and wide and the stars go on forever. Only not as colorful, or so close.” He tapped a tiny pointed star and it spun on a delicate silver thread. “This one was done in pieces, right? How the hell did you make them so small?”


“Practice.” I left him marveling over my freakish masterpiece and flipped the bedroom light switch. There were a couple pair of jeans on the floor, and the simple maple bed lay unmade, but otherwise, a portion of the Milky Way flowed from my window, over the bed, and disappeared in the closet. Pretty much business as usual.


Robb followed me, nosing into my private life with ease. “Where did you learn to do this?”


“I thought you remembered everything?” I wouldn’t bore him with a retelling, but the only real memory I had, before I became a ward of this fine state of , was making my first paper crane when I was maybe four or five. We were in a bus station, my mother and I. We’d gone inside to keep warm and to pass the time, and she showed me how to crease those tricky paper folds. I could still see her blonde hair falling across my cold fingers as she worked. Make a wish, Jason baby.