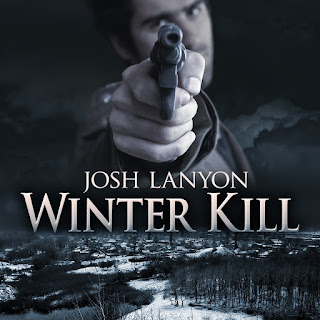 Adam and Rob from WINTER KILL


“Let’s just go to your family for Christmas.” Adam glanced at the clock and set his coffee cup in the stainless steel sink.


“Yes,” Adam said with brisk indifference. He was already on his way out the door. In that charcoal gray suit he looked as handsome and stylish as if he was headed for a GQ magazine shoot and not a day of chasing bad guys through the mean streets of Klamath Falls.


Rob put down his coffee cup, following Adam down the stairs that led to the garage.


Adam had been working out of the Bend satellite office for the past four months--which was exactly how long they had been living together.


Rob said, “It’s probably only fair to go to your family. But I can’t deny I’m looking forward to the fun of sharing our meet cute story with the aunts and uncles and cousins. The adorable tale of how a serial killer brought us together...”


Adam, still in motion, threw over his shoulder, “Sure. Up to you.”


Rob stopped midway down the stairs. Adam’s mind was clearly not on the holidays. It wasn’t on Rob at all. He hadn’t even remembered to kiss Rob goodbye. Not that it was a huge deal, but they were both conscious of the fact that they had jobs with a higher level of risk than working in, say, a hardware store.


But Adam was preoccupied with work. Not a big case or anything like that. He was just trying to fit in with his new team, his new boss, his new coworkers, his new partner. The truth was, Bend  was overjoyed to get him, thrilled Adam had opted for their satellite office rather than Portland, but Adam couldn’t see it. He was in high gear all the time. And given the fact that he was by nature an overachiever…Adam giving that extra 110% was frankly exhausting. But Rob got it. Adam had given up a lot--everything--to move to Nearby and be with Rob. Rob was determined to make as much easy for Adam as he could.


Adam jumped in his SUV, hit the automatic garage door opener, and zipped out into the wintry morning. Rob walked slowly back upstairs.

He was digging Jack Elkins' pickup out of the snowy slush and mud when his cell phone rang.


“Howdy.” Rob leaned the shovel against the tailgate.


Rob wiped his forehead, squinting at the white sun through the dark branches of the towering pines. What time was it? Two? Three?


“No worries. You can make it up to me when you say hello.” He was smiling, anticipating that moment. He definitely preferred their hellos to their goodbyes.


“Rob. About Christmas. Whatever you want is fine.”


“Same here,” Rob said. “It’s one Christmas out of all the Christmases we’re going to spend. Who cares whose family goes first?”


Adam said clearly, “I just want to be with you.” 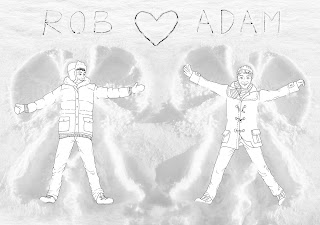 Rob’s heart lightened. “Yeah, me too.” A sudden thought occurred. “What if we don’t go anywhere? It’s our first Christmas together. What if we stay home, just the two of us?”


“No, I’m not saying that,” Adam said. “You want to see your family, of course.” He added in that carefully neutral tone that Rob was getting to know meant he cared a lot. “Unless that’s what you want?”


Rob grinned inwardly, but he was touched too. “Hm. I don’t know,” he mused. “What would we do? I mean beyond cook and eat and sleep and…you know, make snow angels.”


He could hear the smile in Adam’s voice. “Snow angels, huh?”


“Welllll, unless you have a better idea.”


“Oh, I have a couple of ideas,” Adam said softly.