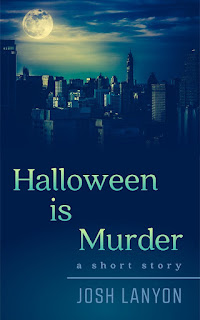 Did you see the moon last night? Gorgeous! Be sure you take a few minutes to look out the window and enjoy the beauty of the night sky.

And how appropriate for today's terrific offering. Natasha Chesterbrook has generously written a coda to Halloween is Murder. :-)

I want to take a moment to say thank you to Natasha and all the authors and artists and readers who have contributed so far to this year's calendar. It really makes for a wonderful event. Even I can't wait to see what every day brings.


I woke with a start and the dissipating image of elongated teeth and sharpened claws inches from my neck chasing my subconscious mind into a desperate gasp for oxygen and sanity. My hand reflexively grasped my neck as I stilled my body’s reaction. Awareness quickly overtook me and I darted my gaze to Mike’s sleeping form next to mine, his bare, broad back with those clearly defined muscles in repose. Willing my breathing to slow, I leaned into his heat, taking as much warmth and strength from it as I dared without disturbing him. My eyes had just fluttered closed feeling the drowse of sleep start to retake me when I heard that deep and familiar rumble, “You okay?” So much for my undercover skills, so to speak.

“Yeah,” I rasped out much too quickly. Compounding the obvious lie, I added, “I’m fine.”

I waited. Mike lay still for minutes, what seemed like hours, while I forced my heart to stopped
beating out of my chest and hoped my desire to be “fine” would manifest itself to be truth. Mike was never one to press or even ask questions. A man of action more than words, he rolled over and just looked at me.

All at once, the night before came to me in a flash. Memories of that first brutal taking where we both fought for control over something neither of us could stop much less contain. My breath hitched recalling that first release, both of us crying out as if in pain or fear or need. It was probably all three but after, I found it wasn’t enough. Not even close. And so we began again almost immediately, the second time with purpose and desire to just enjoy.

Those memories erased any that my nightmare had brought forth, replacing fear and revulsion with desire and heat. Mike was a man worth remembering, to savor when this affair had long died away. The roughness of his hands contrasting with the lush terrain his mouth made. The intensity of his gaze fought with his almost muteness throughout the encounter. His passion clearly wrought in the single shout of my name when he climaxed. It has felt surreal almost enrapture. Even if we never had this again, I wanted those memories etched into my soul.

Now he just looked at me, unmoved, no emotion except perhaps a bit of skepticism on his face. But maybe something else. Regret?

I looked away and sat up, taking in the early morning shadows just creeping in between the slats of the blinds. The coolness of the night still hung in the air fighting to retain its hold on the world as if a door to another much colder place had been left open but was now slowly closing. With only a few hours of sleep I wanted nothing so much as to sink back into the heat within the bedsheets that Mike wore like a second skin. My bedsheets, my skin.

Only when I started to rise did his hand reach out and clasp my wrist. I flinched and he immediately retreated. 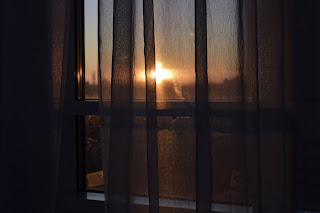 “Changed your mind?” Looking away but glancing back, Mike was uncharacteristically tentative.

Now he stared at me or I should say more precisely he stared at my mouth. And then I could see it, just a hint, not fear exactly but wariness like he’d been down this road before and it never lead to anywhere good. What it wasn’t was regret. And I wondered what he was seeing on my face at that moment. Did he think I was the one with regrets? Sure, last night had changed things and sometimes seeing is harder than being blind but here was Mike and no way did I want to be blind to him anymore.

I laid back down, pulled myself into him and rested my head on his shoulder. His muscles only relaxed after I breathed a deep sigh of comfort and rested my hand on his hip. His arms encircled me and just as drowsiness once again claimed its hold on me, I heard him murmur, “Mianach i gcónaí.”