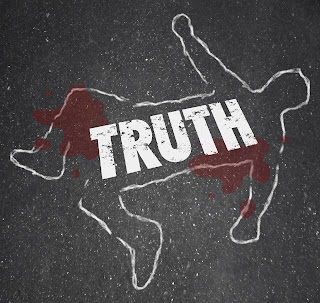 I'm not sure why watching shows about people murdering each other is somehow less distressing right now than watching the news--maybe because the body count is so much lower on Dateline?

Whatever, I've definitely noticed a pattern of behaviors that I'm going to watch for moving forward. ;-D I don't mean in real life--I'm not planning on killing anyone, let alone becoming an amateur sleuth--but these are good reminders for writing crime fiction.

1 - The louder and more hysterical the person reporting the crime is, the more likely THEY are the killer. Especially if the person on the phone is a spouse. Talk about Bad Actors. In every sense of the word. Maybe it's because genuine shock often leaves people seeming weirdly cold and detached rather than, as might seem reasonable, screaming and hysterical.

Also, addressing the victim while on the phone with the 911 operator is almost always a giveaway.

YOU DID IT AND WE ALL KNOW YOU DID IT.

2 -  There is the exact same breakdown of skill and talent on any given police force as there is in any given office anywhere. You know how Beth (we'll call her Beth) never wants to refund customers to whom she recommended the wrong product? Well, if Beth were a cop--and she occasionally is--Beth would be the kind of cop who just goes with the first and obvious suspect and doesn't bother to run that DNA test. And eventually, twenty years later, Caren gets assigned to Cold Cases, runs the DNA, and discovers the wrong person has been sitting in jail for decades.

Seriously, it's mind-blowing how often stuff falls through the cracks. But then it's mind blowing how many orders get dropped at my local coffee house. Despite the life or death stakes, a police force is only as good as its weakest barista.

4 -  Children will forgive (or blank-out) just about anything evil their parents do--including one parent murdering another--UNTIL THEY HAVE THEIR OWN KIDS. It's kind of fascinating to see how often this one plays out. Of course, it does kind of make sense given the fact that none of us really pay close attention to anything until we're about thirty. *cough*

HEY, DAD, I JUST REMEMBERED MOM'S PURSE IS STILL SITTING IN THE BASEMENT ON TOP OF THAT TRUNK BEHIND THE AX DISPLAY...

5 - What is the aversion to divorce?! You don't want to share custody of the kids or pay alimony or split the DVD collection, so instead you KILL the person you've been sharing scrambled eggs with for the last ten years and risk losing everything. EVERYTHING. Because even an entire police force made of baristas knows the spouse is the #1 suspect. Even Beth can solve this one. Would it really have been so bad to have to divvy everything up fair and square? Worse than years of prison food and orange jumpsuits--not to mention you still have to pay lawyers fees?