Regular viewers will know that I've been talking about getting a dog for a few years, but am constantly coming up with excellent reasons as to why the perfect moment never arrives. And as a matter of fact, the perfect moment has still not arrived, but I somehow ended up with a puppy anyway. It's a long story and he's more of a rescue operation than an actual reasoned purchase of the proper puppy...but we've had him for just about four days now and I kinda sorta can't help loving the little cheese mite.

His name is Marlowe and he is most definitely a nut. Er...mutt. Also a nut.

Also he is a huge distraction. Be that as it may, I did manage to get a little short story out this month. It's just a very simple best-friends-to-lovers bit of sweetness called "Plenty of Fish".


BLURB:
Finn loves Blair. Blair loves Finn too, but he’s not in love with him. How can you be in love with someone you’ve known your entire life? Shouldn’t in love feel…different? Newer. Bigger. More…exciting?


Sure, maybe Blair is too romantic—but wasn’t Finn the one who always said there were plenty of fish in the sea?

He was sitting on the wooden tool chest in Finn’s workshop, drinking a can of hydrogen  water, watching Finn sand the top of a rosewood William IV dining table. 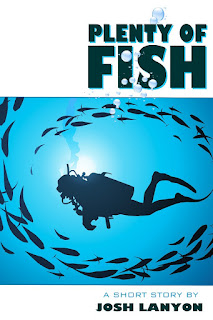 “Yeah?” Finn continued to rub at a pale watermark with a piece of very fine oiled steel wool. He didn’t have to look up to know Blair’s eyes would be shining and soft and a little dreamy. Blair was in love with the idea of being in love.

Finn was also in love. With Blair.

Which maybe Blair knew and maybe he didn’t. There had been that one time last year, when Finn had kissed Blair and whispered, “I love you, Blair. Why don’t we give it a try?”

Blair had laughed, then looked confused and finally embarrassed when he saw Finn was serious. Finn had—not quite in the nick of time—managed to laugh too and pretend it was a joke. Blair’s eyes had lit with relief, though his quick smile had been a little uncertain.

Things had been strained between them for a couple of weeks but eventually had gone back to normal.

In fairness, Finn’s timing had been crap. As usual. Blair had just found out Logan was cheating on him, so even if he had been receptive to the idea of Finn eventually stepping into Logan’s shoes, it was not the time to bring it up. It was just that by then Finn had sort of reached his breaking point.
It hadn’t helped when he’d suddenly remembered how in junior high, Blair had kissed him behind the handball courts at Ernie Howlett Park, and he’d wiped his mouth and told Blair sternly to knock it off.

It had only taken him twelve years to figure out being kissed by Blair was actually something he’d really, really like. That it was, in fact, near the top of the Ten Things He’d Like Most to Happen in the Near Future list. Right below Sleep with Blair and right above Discover a Goddard and Townsend family cabinet—or other piece of valuable anything—the next time he was dumb enough to bid on an abandoned storage unit.

“Plenty of Fish?” Finn asked. He didn’t bother to hide his skepticism. Dating sites were for the desperate, in his opinion. Not including Blair, of course.

Finn sanded harder. The watermark had nearly penetrated all the way through the polish. “Yep,” he muttered. “Nothing more fun than a broken wrist.”

Carlos had been into mountain biking, which Finn had tried to tell Blair was different from regular biking. As usual, Blair had to find out the hard way.

“He sure was. I can’t think of anybody nicer than Louis.”

Louis had been into rock climbing, and Blair had discovered belatedly that he had a little problem with extreme heights. Their first and only date had been spent with Louis coaxing and cajoling Blair off the cliffside where he’d been frozen, paralyzed with acrophobia, for hours. Hours.

Louis had been a very nice guy, and Finn was grateful to him for not leaving Blair up there on “Touch and Go Face” in Joshua Tree National Park.

Blair wasn’t saying anything. Finn studied him, and his heart seemed to crowd his rib cage. It had seemed to come out of nowhere, this…crazy development in his feelings for Blair.

And hopefully it would eventually return to nowhere.

You can buy "Plenty of Fish" through Kobo, B&N, Smashwords and Amazon. Hopefully it will be up at iBooks soon too!
Posted by Josh Lanyon at 1:00 AM