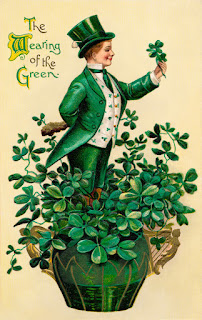 As someone of what the old folks used to call "Scotch-Irish" descent, St. Paddy's has always been a big deal in my family. For years it was a grueling marathon of a day -- gig after gig after gig (usually in pubs that grew more and more rowdy as the day wore on) -- but these days it's more likely to be relatively quiet, spent with family or close friends. The SO will cook corned beef and colcannon, maybe fix up a couple of Irish Mists...we'll listen to our favorite Irish bands and perhaps watch an Irish film (anything from The Commitments -- if you've ever been in a band, that is the film for you -- or something as nutty as The Quiet Man).

Not everyone makes a big deal of cultural heritage and ancestry--and that's absolutely all right (why focus on the past when you're headed toward the future?) but in my family, we don't forget. ANYTHING. EVER. You remember those stories about the Scots dumping Campbell soup into the sea during World War 2 relief efforts? Yeah. Where I come from, that was considered the right move. :-D

Anyway, is there a holiday that is special to you or your family? How do you celebrate your family ancestry or cultural heritage?