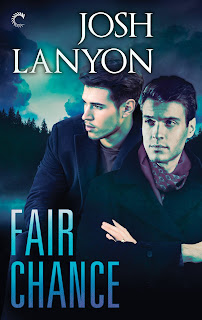 Fair Chance, the final installment in the All's Fair trilogy is out today in print, ebook and audio.

The Blurb:
Elliot Mills comes face-to-face with evil in this follow-up to Fair Game and Fair Chance from bestselling author Josh Lanyon

One final game of cat and mouse...

Ex-FBI agent Elliot Mills thought he was done with the most brutal case of his career. The Sculptor, the serial killer he spent years hunting, is finally in jail. But Elliot's hope dies when he learns the murderer wasn't acting alone. Now everyone is at risk once again--from a madman determined to finish his partner's gruesome mission.

“Excellent choices, gentlemen.” The petite brunette waitress dropped her ticket pad in the pocket of her teeny tiny black skirt and bestowed a dazzling and impartial smile on both of them. “I’ll be right back with your cocktails.”
They were seated at Stanley & Seafort’s Steak, Chop & Fish House, one of their favorite places in town to dine on the evenings they weren’t in a hurry to get back to Goose Island. The food was fine. The bar was excellent. But more to the point, it gave them a chance to talk about the case on neutral ground. When Elliot had finally acceded to SAC Montgomery’s request that he visit Corian, one of Tucker’s stipulations had been that they not take the case home with them. From the point they boarded the ferry at Steilacoom, the topic of the Sculptor was officially shelved.
That was the goal anyway.
Tonight there was more to talk about than could be covered in the drive to the ferry.
Tucker sighed, loosened his tie and leaned back in the sofa-sized booth. Elliot gazed out the picture window at the stunning view of Tacoma and the blue waters of Commencement Bay Harbor beyond. He massaged his knee, which had started to ache.
Tucker glanced at Elliot. “If I seemed…harsh back there,” he began gruffly.
Elliot brushed the apology aside. “It’s all right. I get it.” He didn’t expect—or need—Tucker to pull his punches when they were working.
“You’re my priority. That doesn’t change. I genuinely believe your involvement is not critical, but even if I did think we needed your help, I wouldn’t be happy with this because I don’t think this is good for you. Or us.”
Well, hell. That was Tucker for you. No beating around the bush. And an unnerving ability to say aloud the things most guys, including Elliot, were not comfortable saying outside the privacy of their own bedroom.
“I know, Tucker. Like I said, I get it.” This ground was so well trod it was practically mud beneath Tucker’s handmade Italian shoes. “But just once I’d like to discuss the case without a preface from you on how much you didn’t—and don’t—want me involved.”
Tucker grimaced. Nodded. 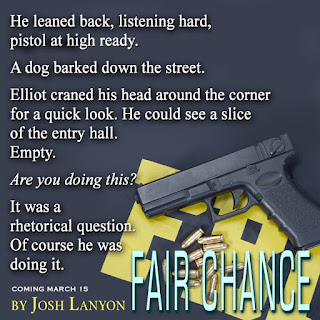 They were silent for a few minutes. That was mostly weariness, though a small amount of irritation factored in. They were both too opinionated and strong-willed not to bump heads now and again. They’d learned over the past months that simply taking a deep breath and a step back usually took care of things.
The waitress appeared with their drinks. Whisky and soda for Tucker and a glass of California merlot for Elliot. He needed a drink after the day he’d had, but he would be taking pain meds that night for sure. He must have twisted his knee when he’d raced across Corian’s property to see who had opened fire.
Tucker’s expression was somber as he sipped his whisky.
Watching him, Elliot asked, “Do you want me to share my thoughts on my visit to Corian’s place?”
“If you think it’s relevant.”
Elliot let his head fall back, summoning patience.
“Sorry,” Tucker muttered. “It’s not pleasant watching a psychopath threaten your partner.” He threw the rest of his drink back.
Fair enough. Elliot would be struggling with that too, were the shoe on the other foot. There was nothing he could say to comfort Tucker, so he related his trip to Black Diamond and his encounter with Corian’s former neighbor.
Tucker mulled it over. “Do you think Corian was working with an accomplice?”
“I don’t know. My first instinct was no. Except…I’m not sure that was instinct so much as rejection of something I didn’t want to hear.”
“I watched the interview twice. I still can’t make up my mind.”
“Twice?”
Tucker was looking at his empty glass like he didn’t know what had happened to his drink. He caught the waitress’s eye and she nodded. He turned back to Elliot. “What I am sure of is there’s nothing he won’t do to wreck you.”
“Of course,” Elliot said. “We already knew that.”
Tucker’s expression drew a faint smile from him. “Come on, Tucker. We already know I’m the bad guy in Corian’s movie. He didn’t invite me over there because he thinks I’m the one person who can appreciate his artistic genius or have a civilized conversation with him, whatever the hell that’s supposed to mean. He wants me there so that he can dump his horror stories all over me and hopefully cause maximum mental distress.”
“That’s right,” Tucker said grimly. “He’ll try to get to you any way he can. Including physically, so don’t ever turn your back on him.”
“Is that literally or figuratively? Do you want me to shuffle backwards out of the room at the end of each visit?”
“I’m not joking about this.”
“I know. He’ll continue to be handcuffed and wear ankle restraints during our interviews. I’m not about to forget what he’s capable of.”