So in an effort to keep this BlogSpot fresh and entertaining, I thought I'd start supplementing my own bletherings with interviews of friends and favorite writers.

And since she's got TWO, count 'em TWO new stories releasing in June, I thought I'd kick off with my friend, fellow writer, and sometimes editor Nicole Kimberling.

Nicole is the acquiring editor at Blind Eye Books and she does a regular column for the Jessewave Reviews site. She's also the author of the Bellingham Mystery series, which has got to be one of my favorite series in this genre. However, she's mostly known for her spec fiction work.

If you don't know Nicole, you should. And by way of introduction, here's our interview -- I should probably apologize (or at least excuse) the crazy randomness of the questions, but you probably know by now that that's how I roll. So without further adieu...

I give you Nicole Kimberling.

Your success as one of the best editors in the biz has overshadowed your own writing career. How many books do you have published now -- break it down by genre for us?


Including the 2 forthcoming, I have 13 titles--4 novels and 9 novellas. All the novels are speculative fiction. Turnskin is a standalone. Ghost Star Night and Heir of Starlight are part of the Sea of Stars series. My fourth novel, Happy Snak, is science fiction novel that features a straight female protagonist. (Imagine that!)

The novellas are mostly speculative fiction as well. Hell Cop 1 & 2 and Irregulars are all shared worlds. The Red Thread of Forever Love is a standalone.
And the five titles in the Bellingham Mysteries series are all contemporary stories set in the Pacific Northwest.

What do you tell SF pals who smile pityingly at you when you admit to writing romance? Or do you admit it?


I always admit it. I had enough being cagey about my identity back when I was still in the closet. :)
Actually, I was recently invited to  a science fiction workshop to speak about writing in the digital romance field. So there I was telling these twenty young writers about what I do and enduring my share of smirks and eye rolls when one young lady suddenly broke in and said, "When you talk about writing these stories, your face just lights up."

"It's because I enjoy writing about people and above all I adore love stories," I replied.

"But aren't you embarrassed to write about sex?" she asked. Clearly, her interest had been piqued, but she was shy.

I put on my best game face and said, "Why would I be?"

No one had a very good answer to that.

I firmly believe that the derision heaped upon the romance genre is the result of latent, internalized misogyny. In other words, because it's considered women's fiction it is automatically considered inferior--in much the same way that science fiction is considered inferior by people who write about the contemporary world. But no genre of fiction is more or less valuable than any other genre. There are more and less competent writers. That's all.

I went ahead and shared my theory with these aspiring authors. I found it gratifying to see a few light bulbs go on during the ensuing discussion.

I know it's kind of like asking which of your children you prefer, but what do you like writing more: mystery or spec fiction? 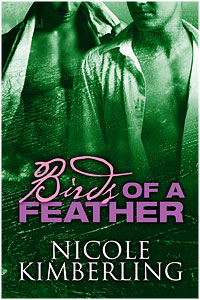 I think me and mystery must have really hit it off because I've taken to incorporating it into all my fantasy plots. The harder question is do I like spec fic or contemporary more and the answer is: I just don't know. Contemporary stories offer me the opportunity to comment on the minute absurdities of everyday life, which I love to do. Spec fic provides a platform to address social issues in an oblique, non-threatening way. That's important to me as well.

I guess if I were forced to give up one, it would be contemporary because I started writing fantasy in order to seduce my wife and I've got a vested interest in keeping that going.

Is it true your cats are possessed by ancient Sumerian demons?


I don't know if I'd call them ancient. That would imply some wisdom--or at least skill acquired over the centuries. As far as I can tell the demons possessing my cats were born yesterday. Honestly, they are so gullible that they actually believe me when I claim that tuna is brought by the Fish Fairy as a reward for good cats only.

Boxers or briefs? No, seriously. Why should this question be reserved for male authors? Why shouldn't everyone have to answer?


I favor bikinis--the kind with the little stripper hip straps so that my wife can thread dollar bills into them should the mood strike. Unfortunately, she seems to only ever have coins.

So...you were an exchange student in Japan, weren't you? What was that like? Have you written a story set in Japan yet?


I went to Japan on a cultural exchange when I was 26. I lived with an amazing, goofy family in Hirosaki for a month, then traveled on my own after that. Probably this trip did more to form my adult identity than anything I'd done before or since. Because I married at 17, I'd never tested myself against the world without a wingman. In Japan, I couldn't read or speak and wasn't allowed to drive. Without my three favorite activities, who would I be?

I didn't bring a dictionary because I thought I'd try harder to learn the language if I couldn't look things up. This, as it turned out, was a stupid idea. However, I did manage to understand basic commands like "sit down" and "eat" also, "sit down and eat." While I was there, I discovered previously unknown personal capacities such as communicating via mime, unerring spotting of English-speakers at train stations, and immunity to fear of mystery food. I returned home with confidence I'd never known and a suitcase full of yaoi manga that I painstakingly translated over the next year.

The translations were terrible and full of mistakes, but I learned a lot about grammar--both Japanese and English.

I set my novella, "The Red Thread of Forever Love," in Aomori Prefecture--the same area where I had my homestay. I loved being able to write about some of the weirder aspects of Japanese culture as I experienced it. For instance, in Red Thread, there is a scene where the protagonist gets in a karaoke-off with a drunk businessman at a bar. This truly happened to me.

However, part of the magic of fiction is being able to rewrite your own tragic failures as awesome triumphs!

What's the last piece of music you listened to? Did you sing along?


When I Grow Up by Fever Ray. I don't ever sing along to music, which is pretty weird, considering I studied opera for three years. You'd think it would have stuck. Now I only sing to the boys at the restaurant work and only when they're feeling puny.

How did you and the missus meet?


When I was 11, I transferred from public to private school. I was one of only 2 new students admitted that year. During language arts the teacher asked the students to pair off to do some exercise. Because no one knew me, I ended up being forcibly partnered with the other remainder student. You know the one--the smelly boy nobody liked. Seeing me about to experience irrevocable social damage, Dawn jilted her partner and rescued me. She alighted at my desk like an angel who had not yet learned the purpose of hairbrushes. She knew how to draw. I fell instantly in love.

Six months later my family moved thirty miles down the road and I went back to public school. Dawn and I kept up correspondence--which is to say that we mailed each other stories. Mine weren't very good, but they got the job done.

Less than a year after that, on my waterbed, beneath the wooden unicorn headboard that my father made, Dawn kissed me. From that moment forward I devoted all my intellect, strength and resources to ensuring the continuation of physical contact between us.

I don't have a waterbed anymore, though. Too sloshy.

Content edits for Astrid Amara's forthcoming alt-Crimean War novel, "Bend Up Every Spirit."
Wait... that's not what I'm supposed to be talking about here is it?

Currently, I'm writing my Irregulars Christmas Coda. That's gotten me thinking about writing another story about Agent Keith Curry. I think the first line is going to be, "Someone put a curse on me."


The opportunity to communicate complex thoughts to readers is what keeps me pounding away at the computer keys. It's a lonely business, though and I tire of myself easily. That's the hardest thing about writing for me--the lack of direct human contact gets me down after a while. Hence, my keeping of the restaurant cooking gig.


Only my toes, and always during high school gymnastics meets. I've never broken anybody else's bones, either accidentally or on purpose, but it's often required a special effort.


Giving the character a sense of having a life outside the confines of the pages of the book. What I mean is that a character should have an origin, interests and opinions. He should have a job, rather than just a costume. Even guys who are so rich that they don't need to work pursue dreams--sometimes really crazy ones, like building a personal submersible capable of reaching the bottom of the Mariana Trench. In short, a character needs a goal beyond finding love, otherwise after the last page of the book he will have nothing more to do and will vanish from the imagination of the reader.

What is your most favorite dessert in all the world? Is that eating or making it?


French pâte de fruits--any flavor. Cheap or expensive. I've never tried to make it. I have neither the exactitude nor the utter sobriety required to make candy. I mean, that shit's dangerous! Hot sugar sticks to unprotected skin like napalm. (Probably why it's been deployed as a weapon so often.)

Is there any genre you'd like to tackle but you're kinda sorta afraid?


Romance? :) Seriously, I'm scared of tackling that every single time. That and short stories--any kind. I like at least 20K words to play around with.


When I was 17 I stole my mother-in-law's Volkswagon Rabbit and, in the middle of a three-state blizzard, drove from Colorado to California. My mother-in-law was justifiably angry about the theft. But weirdly, she never made me give the car back.

You can find out more about Nicole and her work -- okay, her work, anyway -- right here and HERE.
Posted by Josh Lanyon at 1:00 AM