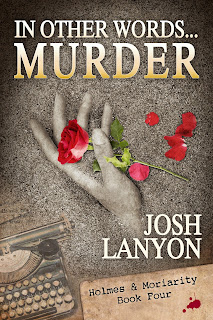 So two weeks ago (it seems like a lifetime) my dad wound up in the ER with a very slowwwww and erratic heartbeat. He's 87 and in pretty good health, still sharp as a poniard...but clearly not immortal. Much angst and drama commenced, but the long and short of it is he now has a brand new pacemaker and is recovering at home.

That's the good news, and really all things considered, there is no bad news, but I did not do a lot of writing during that time. As in none. It's just really difficult to write funny, wacky stories when you're worried and anxious and not sure what's happening.

Anyway, I'm back to work now on In Other Words... Murder. Yep, it's going to be late. We're now looking at the end of June.  And after that comes The Ghost Had an Early Check-out.

While I'm not working as quickly as I'd hoped, I am working and producing more steadily than last year, and that's the other good news.

“Hm?” I was studying the colorful travel brochures littering my lap and the raw silk ivory comforter. Walk in the footsteps of the Colosseum’s ancient gladiators, cruise canals in a golden gondola and live La Dolce Vita! read the cover of the brochure I held. I could practically feel the blue of the Roman sky beneath my fingertips.

There was a bewildering array of options. Everything from private guided tours with personally tailored itineraries to culturally themed coach tours.  We could do an eight-day Adriatic cruise or a fourteen-day grand tour by rail.

The only option not available to me was staying home.

It was eleven o’clock on a Friday night in late October and we were cozily tucked up in our master bedroom at 321 Cherry Lane. J.X. was doing the San Francisco Examiner crossword and I was figuring out our spring vacation plans. It really doesn’t get much more domesticated than that.

“Do away with,” I replied absently.

He was silent as his pencil scratched on paper. He made a disgusted sound. “You’re right. How’d I miss that one?”

He regarded me for a moment, then nodded at the scattered brochures. “What do you think? What looks good to you?”

“Money is no object.”

I snorted. “It might not be the object, but it should be a consideration.”

He got that dark-eyed earnest look he always wore when applying the thumbscrews. “I want to do this for you, Kit. I don’t care about the money. I want us to have this. We’ve never gone away on vacation together.”

His mouth quirked, but he said coaxingly, “Think about it. You and me. Hot, naked sex in a gondola.”

I gave him a look of horror. “They have gondoliers, you know!”

He laughed. “Okay, then how about a gondola ride at sunset and candlelight dinner on the terrace of our private villa--followed by hot, naked sex beneath the stars?”

I cleared my throat.

“We could explore Rome’s catacombs—or just visit a few museums and galleries. We could see the Pantheon and the Colosseum. We could go to Florence and see the Ponte Vecchio. Or spend a couple of days swimming with dolphins off the Isle of Capri.”

Despite the fact that I don’t like to travel—hate to travel—a lot of that did sound kind of appealing. I said, “Private villa, huh?”

“Whatever you want, Kit.” He was suddenly serious, gaze solemn, the line of his mouth soft. Such a romantic guy. Especially for an ex-cop. Well, really, for anyone.

“It sounds…nice,” I admitted. It sounded better than nice. Maybe even kind of lovely.

His smile was very white in the lamplight. He tossed the newspaper and pencil aside and drew me into his arms. We fell back against the mattress. The brochures whispered and crackled beneath us as his mouth found mine. He kissed me deeply, sweetly, whispered, “Maybe we could make it a honeymoon…”

Before I could reply—not that I had a reply ready—the bedroom door pushed wide and a small voice said, “Uncle Julie?”

J.X. sat up. “Hey, honey.” He sounded only the tiniest bit flustered, plus got bonus points for not springing completely off the bed as I had done the first few times this happened. “You’re supposed to knock, remember?”

Gage was J.X.’s five-year-old nephew. He was spending the weekend with us, as he did a couple of times a month.

“A bad dream, huh?” J.X. opened his arms and Gage climbed into bed between us, snuggling against him. “We don’t have bad dreams in this house.”

I threw him a look of disbelief. He meant well, but come on. Everybody has nightmares.

“What did you dream?” I asked.

Gage rolled me a sideways look. Over the past four months we’d forged a truce, but he still largely took me on sufferance. Which was okay because, frankly, I’m an acquired taste: best consumed with cream, sugar and, yeah, a generous heaping of sufferance.

“Monsters?” J.X. repeated thoughtfully. “There are no monsters here. This is a monster-free zone.” He gave Gage a little squeeze. “You know what we do to monsters in this house?”

He was right to be wary because J.X. pretend-growled, “We tickle them,” and pounced.

Gage squealed and the two of them rolled around on the travel brochures, Gage wriggling and kicking—managing to land a few well-aimed blows at me in passing—before finally sitting up and resettling themselves against the pillows bulwarking the headboard.

J.X. winked at me. I shook my head resignedly.

Gage and I looked at each other in complete understanding. He knew I did not want to attend this Halloween Horror any more than he wanted me there. He knew, as did I, we neither of us had any choice. It was in these moments we could actually walk a mile or two in the other’s mis-sized shoes.
J.X. continued to extol the ordeals—er, delights—of the day ahead which was scheduled to conclude with the movie Smallfoot and dinner at Giorgio’s Pizzeria.

“Okay,” Gage said doubtfully. And then, “Can I sleep in here?”

J.X. wavered, but stayed strong. “No, honey. You’re getting too big to bunk in here. There’s not enough room for all three of us. Uncle Christopher and I would fall right out onto the floor!”

And then the monster that lives under the bed would get us.

But see, I was getting fond of the little imp because I didn’t say it. Gage, however had no doubt who the villain of the piece was. His bleak and beady gaze fell on me.

“What about a night light?” I suggested.

He seemed to be asking Gage--who looked to me like a kid who very much hoped they could maybe get into that habit.

“As habits go,” I began. I remembered that I was technically only an honorary uncle and should be not be debating Gage’s real uncle’s child rearing decisions in front of him. I shrugged. But couldn’t help adding. “It’s a big house and it’s still strange to him. I had a night light when I was his age.”
J.X. frowned. “Did you?”

“Night lights can disrupt sleep patterns. Maybe that’s why you have these bouts of insomnia.”

“You know what disrupts sleep patterns? Being scared there’s a monster under your bed or in the closet.”

Email ThisBlogThis!Share to TwitterShare to FacebookShare to Pinterest
Labels: holmes and moriarity, in other words...murder