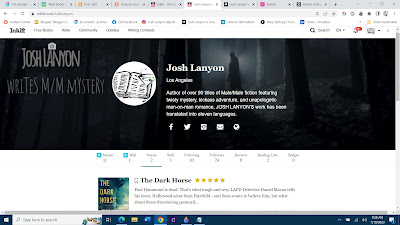 So. Have you heard of Inkitt?
Frankly, I'd never heard of it either until their very charming representative contacted me about their plans to experiment with a subscription model.  Something I know a little bit about.
As you probably know by now, I'm a creator on--and proponent of--Patreon. Which is to say, I adore my patrons. I have issues with Patreon itself, which I won't detail here.
Actually, what Inkitt is proposing is sort of a cross between Patreon and Radish. If you're familiar with web publishing platforms and mobile apps, you know that those readers are largely not the same readers scouring Amazon for KDP deals. ;-D Which is why Vella has not been the raging success Amazon hoped for. They're starting with a completely different customer base.
Mobile app readers are lured into paying WAY more for stories because the web platform interface is more interactive. It's a bit like a game. And the experience is as much of what the readers want as is the book itself. I make a few bucks here and there on these apps with my backlist, but authors like SC Wynne, who can deliver fresh content daily, are killing it on Radish.
That's my experience anyway. YMMD.
Back to Inkitt.
The audience on Inkitt is largely not my audience--romance rather than mystery and romantic suspense are the big draw on these platforms--but our goal as authors is to constantly seek to build our audience. one reader at a time.
So the reality is I'll have to bring my own audience to Inkitt to start with because A - I'm unknown in that world (now there's a humbling experience :-D :-D :-D ) and B - the Inkitt interface is pretty disastrous (as in discoverability on the site is almost impossible if the goal is sell backlist rather than write fresh content and then publish for free).
For example, if you click on my Inkitt wall to see what goodies might await you, you see this enticing prospect: 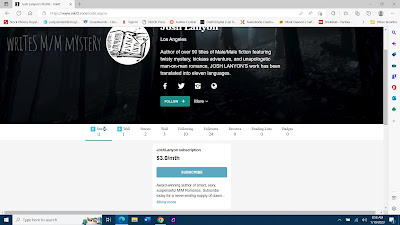 I mean, WHO COULD RESIST?! LOL.
In fact, this is a partial glimpse of what lies behind the wall--with lots more coming soon: 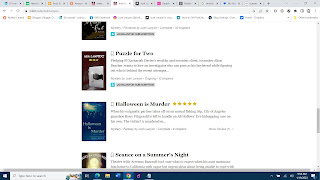 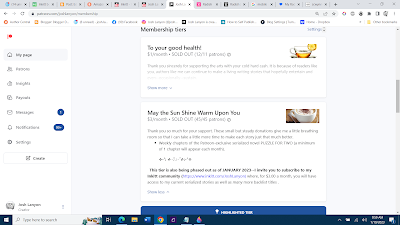 You see what I'm saying, right?
Now that's not exactly a true picture, because on Patreon, I also throw in a lot of bonuses throughout the year AND we have a holiday zoom call. You're going to get more personal interaction on Patreon, but basically Inkitt is the better deal as far as books for your bucks.
Why am I doing this when I claim to be a proponent of Patreon? Well, as you know, I've never been a fan of putting all my eggs in one basket. But also, Patreon's service fees make the $1.00 and $3.00 tiers pretty much loss leaders. I've already capped them and I'm slowly but surely phasing them out on the platform. Inkitt takes a smaller cut and so a $3.00 tier could actually, eventually be profitable. Maybe. With enough subscribers. The goal is always to find new readers and there are readers to be found on Inkitt.
INKITT DEMOGRAPHICS (**NEWLY ADDED) 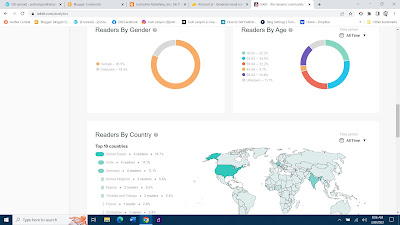 The other goal, of course, is to earn passive income through my existing backlist. All these little revenue streams add up. As my titles are held to be rather pricy in the world of permafree, .99 cents, and Kindle Unlimited, this particular subscription is a pretty good deal for the dollars. AND you're supporting an author whose work you enjoy.
At least, I think it's a pretty good deal, but then I would. ;-D  Let me know what YOU think.
Posted by Josh Lanyon at 12:00 AM