New Release: I BURIED A WITCH (Bedknobs and Broomsticks 2) 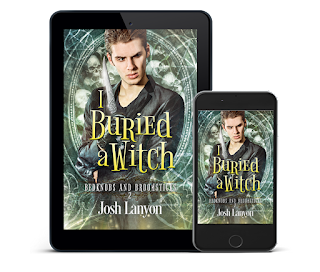 Antiques dealer (and witch) Cosmo Saville adores his new husband, but his little white lies—and some very black magic—are about to bring his fairytale romance to an end. Someone is killing San Francisco’s spell casters, and the only person Cosmo can turn to, the man who so recently swore to love and cherish him, isn’t taking his phone calls.

The only magic Police Commissioner John Joseph Galbraith believes in is true love. Discovering he’s married to a witch—a witch with something alarmingly like magical powers—is nearly as bad as discovering the man he loves tricked and deceived him. John shoulders the pain of betrayal and packs his bags. But when he learns Cosmo is in the crosshairs of a mysterious and murderous plot, he knows he must do everything in his mortal power to protect him.

Till death do them part. With their relationship on the rocks, Cosmo and Commissioner Galbraith join forces to uncover the shadowy figure behind the deadly conspiracy.

Can the star-crossed couple bring down a killer before the dark threat extinguishes true love’s flame?

I sipped my wine, listening to the prolonged silence from the hallway, and my disquiet grew.


Whatever this was, it was not good news.

I heard him replace the phone. The floorboards squeaked as he returned to the dining room.


“That was Sergeant Bergamasco,” he said, retaking his seat at the table.

“I heard. Is there a problem?”

The candlelight cast severe shadows across his hard cheekbones and dark eyes. He said evenly, “I think there is, yes. I understand you visited Ciara Reitherman this morning.”

I felt myself changing color. “I—yes. I did.”

“Is there some reason you didn’t want to tell me about it yourself?”

Several reasons—though I couldn’t admit that—starting with the scant hope that John wouldn’t find out.

“Frankly? I didn’t think you’d want me to go, and I felt that I needed to hear what she had to say.” 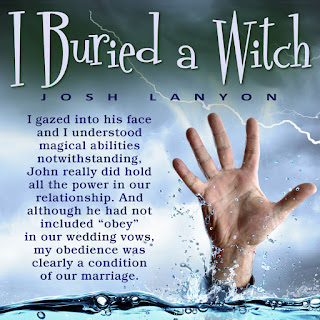 “I-I’m not sure I understand?”

“Why did you feel you needed to hear what she had to say?”

He drew a sharp breath, which he then let out slowly, quietly. “Cos, does it not occur to you that by visiting this woman, you’re not only jeopardizing the case against her, you’re very likely reinstating yourself as a possible suspect in Reitherman’s death?”

No, to be honest, neither of those things had occurred to me.

I protested, “What? That’s ridiculous!”

“It’s not ridiculous at all. Her defense could try to claim that a relationship exists between the two of you, that together, and for reasons not yet known to the prosecution, you concocted a scheme to get rid of Reitherman’s husband, and then for reasons unknown, fell out.”

“Nobody would believe that for a minute. What would my motive be?”

“Motive is irrelevant. Motive can always be found if the other pieces of the puzzle are in place.”

“But the other pieces aren’t in place.”

John said, “Not all of them, no. But enough are. Which is why you fell under suspicion the first time around. I can’t believe you blithely strolled into that interview room for a chat with the woman who tried to kill you.”

“She asked to speak to me.”

John pressed his lips together. He took the time to refill his wineglass. He held the bottle up. I shook my head.

He said carefully, and I could hear that greatly strained patience, “The main reason you’re no longer under suspicion is because she is.”

“Yes, but she shouldn’t be. I told you I didn’t think she murdered Seamus, and she confirmed it.”

“She… Cos.” For about a split second, John looked truly at a loss.

“That’s nice. Given that she tried to kill you. In front of about fifty witnesses, several of whom belong to SFPD. For that alone, they’re going to lock her up and, hopefully, throw away the key.”
I was dismayed by his casual brutality.

“She thought I killed Seamus.”

“If it is the truth, it strengthens the case against you.”

I saw his point.

I also saw that, being unable to share all the facts of the situation, continuing to try to convince him of anything was a waste of time.

I said quietly, “You’re right. I didn’t think about how things might look or how my visit might potentially affect Ciara’s case. And I realize that you’re concerned for me. I truly believe her when she says she didn’t kill Seamus, but I can see that I should have spoken to you before I went to see her.”

He relaxed a little. “I don’t think any real harm has been done. You’re…an unusual person, Cos. People, my people, don’t always understand—are liable to misinterpret your actions.”
He was not only serious, he was earnest, and I was touched to see his worry for me. 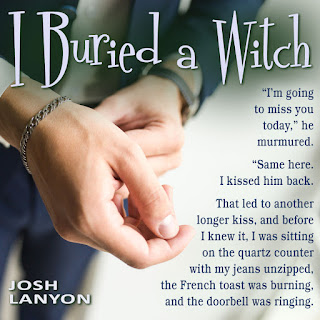 “I know. It’s all right. I don’t care what people think.”

Once more I felt heat flood my face. “Yes. Right. I didn’t mean—”

“I know you didn’t kill Reitherman. I know you’re genuinely worried about a perceived injustice.”

“Well, yes.” Aren’t you? That was my real question. I didn’t have to ask it because John continued in his blunt, dogged way.

“When the Reitherman woman came after you, she lost any sympathy I might have had for her. There’s more than enough evidence to put her away forever, and that’s fine with me.”

I think he saw my shock, because something glinted in his eyes for a moment. Regret? Guilt? Shame? If so, it was gone in the blink of an eye.

I said, “I can’t believe you mean that, John. I know you don’t really.”

Instead of answering, he said, “Promise me you’ll stay away from her. I want your word that you won’t do anything else to jeopardize the case against her.”

“I’m deadly serious about this.”

He was too. It was right there on his face.

I said, “I…I’m not… I don’t know how to answer that. I’m not trying to interfere or make trouble for you. She asked for my help, and—”

“Your word.” John was adamant.

I gazed into his face and understood a couple of hard truths that had escaped me before. Magical abilities notwithstanding, John really did hold all the power in our relationship. And although he had not included “obey” in our wedding vows, my obedience was clearly a condition of our marriage.
The ability to negotiate a hard bargain is the ability to walk away from a bad deal. John—it was right there in the fierce lines of his face, in the steely gleam of his eyes—was prepared—always prepared—to walk away. I was not. Could not even contemplate it. Not then.

In those four minutes I learned more about him than I’d learned in four weeks, and I’m ashamed to admit I crumbled.

I said huskily, “I promise.”

The flinty look faded. We were no longer on opposite sides of the battlefield. “Thank you.”

There must have been something in my face, in my eyes, because his expression grew gentle, apologetic.

He leaned forward to take my hand, his lips brushing across my knuckles and sending a little shiver of pained pleasure down my back. “Thank you, sweetheart.”

(And yes, it will eventually be in print and audio as well!

Email ThisBlogThis!Share to TwitterShare to FacebookShare to Pinterest
Labels: Bedknobs and Broomsticks, I Buried a Witch, new release