New Release FOOTSTEPS IN THE DARK 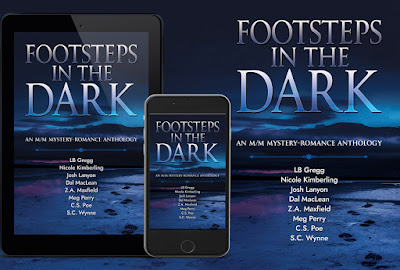 
The snick of a lock.

The squeak of door hinges.

The creak of a floorboard...


Nothing is more mysterious than footsteps in the dark. Are those approaching steps that of friend or enemy? Lover or killer?

Available at these fine retailers:


What's it all about, Alfie? Read on!


Entrée to Murder. After a steady diet of big city trouble, Chef Drew Allison moved to the island town of Orca’s Slough to get a taste of life in the slow lane. But hometown hospitality goes stale when he finds a dead body in the basement of his own Eelgrass Café.

Twelve Seconds. A mysterious phone call, a missing executive, and an exploding rocket throw space reporter Justin Harris and Air Force Special Agent Greg Marcotte into an investigation that will change their lives…if it doesn’t kill them first.

Reality Bites. Detective Cabot Decker is called to the set of hotshot TV producer Jax Thornburn’s reality-TV show after a contestant is mauled to death by a tiger. Is someone trying to ax Jax’s career—or Jax himself?

Blind Man’s Buff. A game of Capture the Flag turns deadly inside an abandoned shopping mall when Tommy and Jonah stumble into a homicidal maniac’s hunting grounds.

A Country for Old Men. Inspector Calum Macleod has returned to the Western Isles of Scotland to bury a part of himself he can’t accept. But the island has old secrets of its own. When a murderer strikes, Calum finds his past can’t be so easily escaped.

Pepper the Crime Lab. When Lonnie Boudreaux’s neighbor is murdered, he must foster the man’s dog, befriend a mysterious former cop, and stop the killer—or else!

Stranger in the House. Miles Tuesday’s memories of Montreal are happy ones, but now that he has inherited the mansion at 13 Place Braeside, everything feels different. Was Madame Martel’s fatal fall really an accident?