New Release IN OTHER WORDS... MURDER 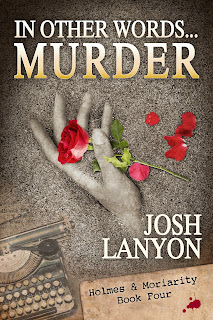 Either late today or sometime tomorrow** (SEE BELOW!)  In Other Words... Murder goes live.

Just finishing up the bits and bobs of edits and all the front and back matter -- and then formatting. This has been quite the month. But anyway, the book is pretty much done and now it's just a matter of getting it up.

It's available for preorders through Amazon, iBooks, and maybe Smashwords? (I don't think Smashwords actually does preorders--they just act as a funnel for preorders at other sites?)

Mystery author and sometimes amateur sleuth Christopher Holmes is now happily (all things being relative) engaged to be married and toying with starting a new career as a true-crime writer when he learns a body has been discovered in the backyard of his former home.

Then, to complicate matters, Christopher’s ex turns up out of the blue, suggesting the body may belong to Christopher’s former personal assistant.

It’s life as usual at Chez Holmes. In other words… Murder.

Oddly enough—or maybe not so oddly, because I did have that third drink and then a fourth—it was easier from that moment on. David and I were able to talk about Dicky and even our own past almost like old friends. It probably helped that he was so complimentary. No, not that he was complimentary, because I didn’t trust his compliments, but that he was genuinely bowled over by the change in me. It was funny really. What a difference a good haircut and a few pounds made. Not just to David. To me. Because I was confident in a way I hadn’t been for years.

But then that wasn’t really about new clothes and fancy-schmancy moisturizer. It was about J.X. About the way he made me feel. Valued. Cherished. Loved.

I resolved to call him as soon as I got back to my room. To hell with who was right and who was wrong. I missed him like crazy. And I wanted him to know that.

“I know you don’t want to hear this,” David said suddenly, “but you’re the perfect person to find out what happened to Dicky. You’ve already solved four murders that I know of. And this happened in your own backyard.”

“First of all, I didn’t solve four murders.” It was more like six if you counted secondary and appended victims. “And definitely not on my own. Anyway, are you so sure he’s dead?”

“Yes.” David’s eyes were dark and sad. “I think I knew something was wrong almost from that first day when he never came home. I tried to talk myself out of it. Tried to convince myself he changed his mind, but I knew.”

“Okay, maybe you’re right. It’s alarming that he’s never turned up in all these months. But neither of us has any useful information as to where to even start looking for what could have happened to him.”

“You must have his old résumé and his job application somewhere.”

“Maybe in a box. I might have dumped it all, though.”

“Exactly.” David leaned back in his chair, smiling. “And if something brilliant should occur to you while sorting through those papers, well, it can’t hurt to make a couple of phone calls. Right?”

He grinned. “Elementary, my dear Holmes!”

I felt a twinge as he said it because that was J.X.’s little joke with me. Then, with an uncomfortable flash, I remembered it had been David’s joke first.

I glanced at my watch and was surprised to see it was nearly ten. We’d been drinking and talking in the dining room for over four hours. The dinner crowd had come and gone, and it was back to just the two of us.

I said, “Wow. Look at the time. I should say good night. I’ve got a long drive home tomorrow.”

David looked surprised and disappointed. “Are you sure?”

“Yep. But thanks for dinner.” I rose, and he rose too.

He said, “My pleasure—and I do mean that.”

“Yeah, it was…good.” Good to confront old ghosts, good to let go of the old anger, the old bitterness anyway. Not an event I was in a hurry to repeat, however. More like a rite of passage.

I started to turn away, and David said quickly, urgently, “Christopher.”

I looked my inquiry.

“I owe you an apology. Not just for Dicky, though for Dicky, yes. That was the worst one, I know. But for…all of it. All the times I hurt you. Whatever I felt, whatever you did, you didn’t deserve that.”

I hadn’t expected an apology—or rather, I’d figured this dinner was his apology—so I didn’t know what to say. Especially since I didn’t miss the whatever-you-did comment.

I finally came up with what I thought was a gracious, “It takes two people to ruin a relationship.”
Which actually isn’t true. One determined and resourceful person can do it all by himself. 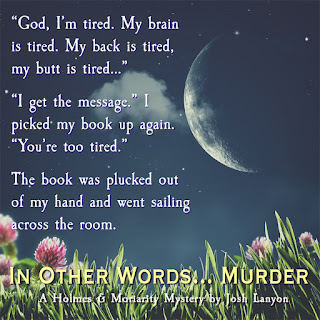 David offered another of his stock smiles. “True. Well, then…” He came around the table to hug me. I think I stood there about as responsive as one of those blank-faced department-store mannequins they prefer these days.

He whispered into my ear, “What about one last time? For old times’ sake.”

I drew back. “What about—huh?”

His smile grew rueful. “You know. We never got to say goodbye.”

“Yeah, we did. I gave you Dicky as a going-away present.”

He leaned in, still smiling, charming and purposeful. His breath was warm against my face. “No, I mean really say goodbye.”

I’m not sure he even heard me. “You have to admit, the sex was always good between us. Really good.”

And even if sex with J.X. had been the worst ever, I still loved him too much to ever think of hurting him the way I’d been hurt. Not in a million years.

I laughed, but not unkindly, not mockingly. “Man, you really are incorrigible,” I said.

David heard me that time. His shoulders slumped, and he sighed. “Yeah. I am. But I mean, we were married.”

“It was a commitment ceremony.”

Did he really not see the irony? I said, “Uh…yeah. Okay. Your point is?”

“We’re allowed to have goodbye-forever sex.”

He scrutinized my face. “I can’t tell when you’re laughing. Was that your final no or—?”
I was still laughing. “That was final.”

“Maybe one more drink would help?”

“One more drink and I’ll pass out. Besides, these people want to go home.” I nodded at the waitress and bartender, who were watching us with weary wariness.

David gave another of those heavy sighs. “All right. Have it your way.”

We bade farewell to the relieved-looking staff and walked out to the lobby.

At the elevators, I turned to him and said, “Good night, David. Thanks again for dinner.”

I stepped into the elevator, punched the button for the third floor. I nodded cordially as the doors closed on David’s glum expression.

I chuckled quietly to myself as I strolled down the brightly lit hall and let myself into my room. I flipped on the lights and moved to pull the drapes across the windows.

I was buzzed but not drunk, and I felt pleasantly…pleasant. I’d have a leisurely hot shower, get in bed, and phone J.X. If all went well, we could maybe even manage a little phone sex. Phone sex with J.X. was still better than live and in-person sex with anybody else.

These agreeable plans evaporated at the tentative knock on my door.

I admit being propositioned by David—urgently propositioned at that—had been good for my ego, but this was not flattering or amusing. Jesus Christ. He couldn’t be that desperate to get laid. 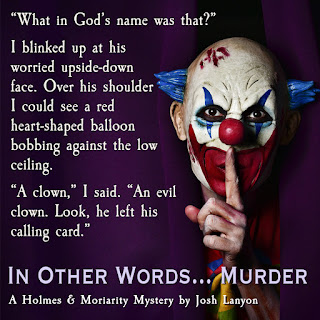 I yanked open the door, prepared to tell him that very thing.

But it was not David standing in the garishly bright hallway.

Or maybe it wasn’t the hall that was garishly bright. Maybe it was the green-haired guy wearing whiteface and a blue polka-dot clown suit.

The clown said nothing.

He gazed at me with his sad clown face, complete with painted downturned mouth and eye drips. His costume was one of those ruffled, old-fashioned things—I forget what they call them—and he was holding a single red heart-shaped balloon.

I stared silently back at him. I was thinking—and at this time the defense wishes to call upon the four G&Ts, two of which had occurred on an empty stomach—that maybe J.X. had sent some kind of weird floral-delivery apology. Except I did not see any flowers and J.X. did not like clowns.

I transferred my gaze from the clown’s black eyes to his red balloon. I said, “Where are the other ninety-eight?”

The clown’s blue-gloved hand released the string of the balloon, which went sailing to the ceiling, bouncing against it with an eerie whispering sound.


**It's so long since I've done preorders at Amazon I didn't realize I couldn't release immediately. SO the book goes live Tuesday July 17 at Amazon. It's already live at Kobo and B&N. Smashwords actually pushed the book back three days because it turns out their deadline also includes their own approval time, which pushed it back to July 23 there and iBooks.
Posted by Josh Lanyon at 7:16 AM

Email ThisBlogThis!Share to TwitterShare to FacebookShare to Pinterest
Labels: #amwriting, holmes and moriarity, in other words...murder, new release