Results of my KU Experiment Take 2

Last September I announced I was going to experiment with Kindle Unlimited again--and that I would publish the results once I had them.

If you missed that post, here's my reasoning. I still think the reasons were valid--and I am still against pinning your entire writing career on Kindle Unlimited for several reasons:

1 - Amazon is already way too powerful and we are all way too dependent on them--even those of us who continue to resist the lure of Kindle Unlimited.

2 - I believe the only way to guarantee a healthy market is competition--and Amazon's competition cannot survive if we all give in and go exclusive. Without a healthy thriving marketplace, Amazon only becomes more powerful and more autocratic. If you're angry at the way they deal with reviewers and royalties and all the rest of it now, just wait for the day when Amazon is the only game in town.

3 - Amazon is changing both the way people read and the way books are written--and not for the better. In order to thrive in the Amazon food chain, a steady supply of books must be cranked out which results in burnout and breakdown--and encourages writers to take short cuts that absolutely affect the quality of books. Some of those shortcuts including hiring ghostwriters--which is good for the ghostwriters, I admit--but it's also a disingenuous way to do business. You can see the effect of KU in how people read too. There's a lot of skimming and scanning by what are now referred to as "whale readers." Readers who consume vast amounts of product without really absorbing much of it--not least because a lot of it is just sand and water.

Anyway, those are my main reasons. I admit that Kindle Unlimited can be a great tool when used in conjunction with exercise and diet--wait. Wrong lecture. When used with a game plan that includes also going wide at intervals, but putting all your eggs in one basket is never a good idea. And that's actually also my advice for traditional authors as well. Diversify, diversify, diversify.

Anyway, it took me a while to get around to figuring out the data on my experiment. For one thing I wasn't in any hurry because I believed I already knew the answer to my question.

But it turns out I was partly wrong. And, hey, I'm not afraid to admit when I'm wrong.

By using Book Report I was able to see at a glance that I earned way WAY more in sales than kindle page reads during the six months I had Murder Between the Pages available in Kindle Unlimited. 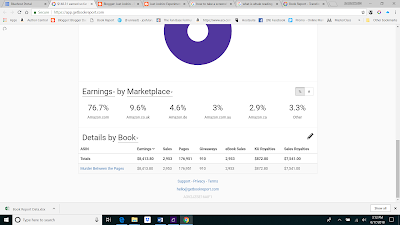 That one's not even close. I suspect that choosing a historical--and a quirky, satirical historical novella at that--was not a good choice for Kindle Unlimited. Probably a more realistic experiment would have been something more typical: a novel length standalone FBI thriller, for example. That might have offered a more fair comparison.

But anyway, that was the original book I chose to experiment with and those were the results.

With my second KU experiment I decided to create a couple of box sets and see how those did. One of the box sets I was experimenting with was an existing set Male/Male Mystery & Suspense Box Set: 6 Novellas which is usually priced at $9.99 but was priced at $3.99 for the 90 days it was listed in KU.

The second set was created specifically for my KU experiment: Partners in Crime: 3 Classic Gay Mystery Novels. This too was listed at $3.99 for the 90 days it was listed in Kindle Unlimited.

Now, again, the English titles are all older titles that earned out long ago. The Spanish translations do almost nothing, so I was curious as to whether KU could move the needle on them. 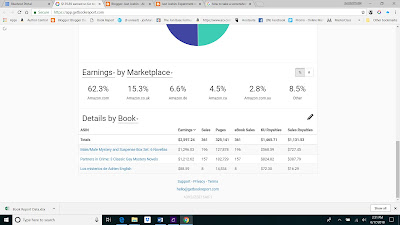 The results were kind of all over the place. With the six-novella box set--which has been available forever--I made more money in outright sales than KU reads. I think this is because my existing readership saw a chance to pick up some completer titles and simply bought the box set outright.

With the three-novel box set, I made more in page reads. I'm going to guess that's because my existing readership has all my novels already and so the sale was not useful to them. The page reads probably came from new readers, but they were really pretty low, so going wide would easily made up the difference there.

As for the Spanish box set, I earned more in page reads, but still again, very minimal numbers.

My conclusion? Advertising probably would have made some difference, but old titles are probably not useful as far as any kind of serious experiment.

At this point in my calculations I realized I had left out a key comparison, which is what the single titles typically averaged in sales during a three month period.

However, because I'm a glutton for punishment, the first thing I checked right off the top was how much had the novella box set earned at its regular price. Never mind 90 day averages, the entire amount it earned for 2017 (not including the period of my KU experiment) was $557.55. So basically it earned more in three months of KU than the rest of the year. Ouch.

Okay, but that was just through Amazon. Including my other sales channels, the book did sell more at full price wide in nine months than in three months of KU. BUT the fact that the numbers are that close is...well, it can't be dismissed. What also can't be dismissed is I sold more copies at $3.99 in three months than I did at nine months of $9.99.

Fair enough, but it is a very old collection. And the stories in the collection were very old when I collected them.

On the other side of that, ideally I'd like every single title to continue to earn something forever. My challenge is to figure out the best way to do that.

Okay, so on to comparing sales of the single titles. 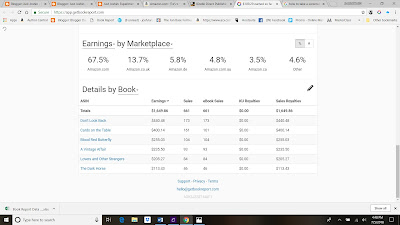 So basically in three months the box set earned more in page reads than any of those single titles did in a year AND it very nearly matched what they all did individually within the year. So yes, safe to say the KU earnings were more than the titles could have earned individually in the same three month period.

That said, again these are really, really old titles AND the single titles were available in the box set during that period, so some people would have opted to buy the box set... But really, I'm just going around in circles here. The books sold more in KU than they would have outside of KU. That's the bottom line. There is really no arguing with that, as much as I am inclined to try.

And what about the three novel box set? How did those single titles fare in comparison? 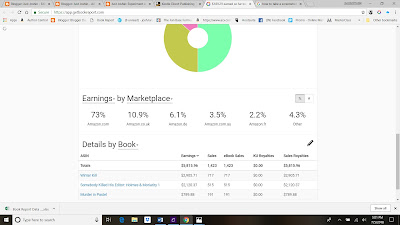 The first and obvious difference is, with the exception of Murder in Pastel, which has never been a big seller (perhaps partly due to its role in certain dramatic events) this time the KU numbers did not outstrip the books' annual earnings or even quarterly earnings.

Three months at the $3.99 sale price did not equal what Winter Kill typically earns in a regularly priced month and barely beat out Somebody Killed His Editor, so there's really no contest there.

And same with the page reads.  The 90-day KU earnings for those titles was $824.82 whereas in a three month period those three titles would typically average around $1938. And that's not including my wide sales, which of course are lost during the KU period.

Now the point of the experiment was to introduce my work to new readers so maybe there's some read-thru value there that I can't see, but numbers-to-numbers, the novels box set earned less in KU than the titles typically earn sold individually at full price. The novella box set earned considerably more.

Had I run a huge advertising campaign on the novels box set, that might have made a difference, but how much would I be willing to spend in order to earn what the novels are already earning? ;-)

There are always variables. These novels will continue to age and their earnings will continue to decline. And, in fact, out of curiosity I compared the earnings on these novels for the last three years both at Amazon and everywhere else. What I found was series remains strong everywhere. Standalone is dropping fast and faster. Well, hell.

In conclusion? I have a lot more information, but I'm still not completely sure what to make of it. There seem to be a lot of x-factors involved in calculating when or whether to put something into KU. The much vaunted formula for success is to produce something new every month or so, release in KU and price at .99. Repeat as necessary for success or until you drop dead. Whichever comes first. I mock, but it's a formula that certainly seems to work for a lot of authors.

Personally, I think the best way to build a large and loyal readership is to stay wide as much as possible. Staying wide is also the only chance of not becoming completely dependent on Amazon, and that should be a major concern for all of us.

But...I don't want to make bad business decisions based purely on emotion. Kindle Unlimited is not going anywhere anytime soon, and I have to factor it into my plans moving forward. I don't know what that means yet, I just know I have to looking at everything objectively.