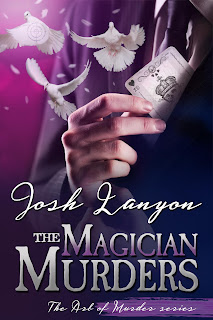 But eventually I always hit a point where I am longing for something a bit peppy--and emotional. I go back to One Republic and Lifehouse and Muse and start to develop a playlist that keeps me in the right mood for each phase of the story. I'm at that point in the creative phase of The Magician Murders. The point where I am driving the SO and Marlowe the Mutt crazy playing the same songs over and over. ;-)

I like this phase though because it means the story is becoming real to me and I'm thinking less about the order of words and more about how the characters feel about each other and all the dreadful things happening to them.

Anyway, here's the official unveiling of The Magician Murders playlist.

Email ThisBlogThis!Share to TwitterShare to FacebookShare to Pinterest
Labels: playlists, the art of murder series, the magician murders