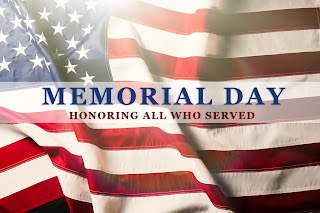 I was going to write a quick hey-there-have-a-great-long-weekend! post when I remembered what we're celebrating on Memorial Day.

The sacrifice of a life for a cause. Some of those causes have been more noble than others, but that's not the real point. The real point is that brave men and women died to uphold whatever cause their country deemed worth dying for.

We have been at war on multiple fronts for over fifteen years. My youngest nephew has never known a time this country was not at war. How can that be? But so it is.

I've been following a debate in the news as to whether young women should have to register for the draft. My dismay is not that women would serve in combat--nor that we still have a draft that we could reanimate at a moment's notice--it's that so many of our lawmakers can consider with equanimity the likelihood of still another impending conflict, one where we'd have to draft every remaining kid.

But I don't want to be a big downer for those of you about to reap the reward of a much-deserved three day weekend. It's just...the original heading of this post was Got Plans? And I couldn't help thinking that...so did all those people whose sacrifice we're acknowledging come Monday.

Humans = strife and strife = war. I think war is part of the human condition. We're an early planet, relatively speaking, and conflict is in our genes. But the least we can do is take a few moments to consider what all those global "conflicts" mean--and that the price is more than a few hot dogs and hamburgers sizzling away on a grill.
Posted by Josh Lanyon at 7:34 AM