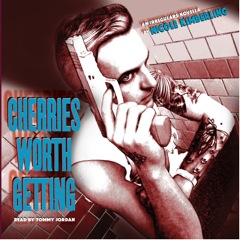 So this morning we are having a little blog surprise! Nicole Kimberling is here talking about her new audio book -- and giving away a copy to some lucky commenter below!

Hey Everybody! I know it’s been a while, but I’m so happy to be back here hanging around at Josh’s. For those of you who do not know me, I am writer of speculative fiction, mysteries and spec-fic mysteries. I’m here today giving away some free copies of my brand new audiobook, Cherries Worth Getting.

This story originally appeared in the Irregulars anthology, which was put out by Blind Eye Books a few years ago. It detailed the exploits of four agents of NIAD, an international governmental agency set up to police and protect the extra-human citizens of the earthly realm. The stories featured demons, goblins with guns, guys with giant swords and at least one kimchi burrito.

Irregulars also featured stories by Astrid Amara, Ginn Hale and our delightful host, Josh Lanyon. The project was generally considered to be a fun time for all of us who worked on it. So the question is—why make an audiobook now, three years later? Well, it was the result of a strange synchronicity. I happened to learn that my brother-in-law, who is a filmmaker, was coming to town for a few weeks on the exact day that I ran into my friend Tommy Jordan, indie rap artist, former merchant marine and audiobook enthusiast. As I was bragging about how my brother-in-law was going to make me a book trailer, I realized that Tommy looked and sounded more or less exactly like my main character, Special Agent Keith Curry.

I asked him to be in my book trailer and he agreed on the spot. In a frenzy of creative euphoria, I asked if he would be willing to record and audiobook for me as well and he said yes. Joy burst through me at having made two huge scores in the space of five minutes. I would have a book trailer! And an audiobook! Then, once my feet hit the ground again I realized that neither of us had any idea how to do either of those things.

So for the next two months, practically glued to each other, we learned. We created what my wife called a “tiny little multi-media empire.” And that’s what I’m here to present today.

To win a copy of Cherries Worth Getting, please tell me what your favorite imaginary creature is in the comments below.

PS—For those of you who already know and (hopefully) enjoy Special Agent Keith Curry, you’ll be happy to know that he’ll be making an appearance in the new Charmed and Dangerous anthology, put out by JCP Books to be released on August 25.

PPS—Tommy Jordan is also the front man of a pop band called Urban Fantasy. He and my brother-in-law liked each other so much they made a second film together—the music video for Urban Fantasy’s second single, “HolySh!t, Mom.” See if you can spot me in my guest appearance as “Mean Drunk Boss Who Fires Connor.”