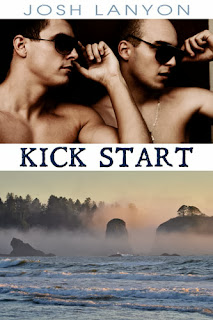 Here's a little (completely unedited) peek at the opening chapter of Kick Start, which should be coming your way probably 1st week of November.

One minute everything was fine. The next minute the job was going south. Fast.


The limousine with Dragomirov hurtled down the mouth of the alley where waited. Not unprepared -- was never unprepared -- but unsuspecting. would be occupied watching for threats to Dragomirov. It would not occur to him that Dragomirov was now a threat to him.


So Will reacted, he responded to the threat to . That’s what partners did, right? Even as Will dropped down onto the top of the limousine, he was mentally justifying his decision to -- justifying it because before he ever hit the roof, he knew he had made a mistake.


The rush of garbage scented air blasted against his face, blurring his vision. The alley was nicer than some alleys in , meaning there were no bums to run over. Orange and green and purple graffiti bled into a long smear of chain link fence topped by coils of barbed wire, old brick walls and metal roll up doors. A couple of phone poles with sagging lines flew by, interspersed with several dumpsters. The alley opening -- and the busy cross street beyond -- was coming up fast. With only seconds to spare, Will wrapped his arms around his head, and rolled, launching himself at a fast-approaching blue dumpster.


There was a sickening moment of flying through thin -- very thin -- air, and then he crash-landed on a mountain of cardboard boxes and black and white garbage bags.


It wasn’t like the movies. Will landed hard and heavily, the bags giving way, the boxes not so much. It hurt. It hurt a lot. But without the boxes and bags, he’d probably have been killed. He reflected on that for a stunned second or two while he listened to the screech of tires fading into the distance, the pound of approaching footsteps.


“Brandt?” splashed through a puddle and skidded to a stop. He sounded winded, though the entire alleyway was only a block long. “Will?”


Will opened his eyes as bent over him. ’s eyes were black in his white face, his jaw set. Ready for the worst.


Life came back to ’s face. “Oh, you bastard. Don’t do that to me!” He expelled a long, shaken breath, and began to check Will over with a swift, anxious hands. “What the hell was that supposed to be?”


Will gave a weak laugh and raised his head. “Everything still attached?”


“I’m fine.” Will waved him off. “I’m fine! Oww!” Yeah, fine was possibly overstating the situation. But he was alive and, miraculously, he seemed to be in one piece. One black and blue piece, probably. “Shit.” Painfully, he crawled out of the nest of garbage. moved to help him, removing a shoebox that had gotten stuck on Will’s elbow. Will climbed -- and it did feel like a climb -- to his feet.


“Jesus Christ, Brandt. You want to explain to me what you thought you were doing?” , sounding much more like his normal ornery self, punched him in the shoulder, and Will toppled back into the trash bags.


“Goddamn it,” Will said slowly and with feeling.


“Sorry,” muttered, hauling him out of the garbage bags once more. He brushed eggshells off Will’s shoulder. “Sorry. But what just happened? Explain to me. What the hell did you think you were doing?”


Will shook his head.


“Dragomirov tears out of here like a bat out of hell. With you on the roof of his car. His asshole driver nearly runs me over --”


“Fired. Without the severance package, I’m guessing.” Will brushed orange peelings and what looked like -- and pray to God was -- raspberry jelly from the front of his leather jacket. The seat of his felt soaked with something he hoped wasn’t toxic. Or caustic.


looked stunned. “What are you talking about? After ten days? What the hell happened?”


It was a fair question. Will was trying to figure that one out himself. “Gretchen Hart is what happened.”


“Gretchen Hart. . Two years ago?” Will prodded. “You remember Victor and Victoria?”


“Gretchen Hart apparently now works for Glukhov. She walked into that meeting, recognized me, and gave Dragomirov her version of what happened in .”


“Pretty close to the truth,” Will admitted.


opened his mouth but couldn’t seem to find the words. Will knew the feeling. He said wearily, “As predicted, Dragomirov doesn’t like feds. A lot. Even ex-feds. So we’re off the case. I guess he thought we were trying to set him up in some kind of sting operation.”


“I never said Dragomirov was a genius.”


was silent. Then he said, “How the hell would that bitch recognize you?”


Will shook his head.


’s face screwed up in anger. “Fuck!” He turned and kicked a white and blue mostly deflated child’s ball that had rolled out of the pile of trash bags. The ball shot to the left, bounced off a green brick wall and landed on the pitted pavement with a flat, angry smack.


Will said nothing. What could he say? had not wanted to take this job in the first place. But they had needed the money and Will had talked him into it. End result: they had put in ten days working a bodyguard detail for a guy who, though maybe not a crook, was certainly a scumball -- and they would not be getting paid for the privilege.


He opened his mouth to apologize, but no. He was already on defense over the thing; not smart to further weaken his position. Anyway, he wasn’t going to apologize for being a realist. They were not in a position to pick and choose clients. How was he supposed to have known their arch nemesis would show up? He hadn’t realized they had an arch nemesis until he’d watched Gretchen Hart freeze in recognition and then morph into the Borg Queen’s.


turned back to face him, fists planted on his narrow hips, eyes glinting the same shade as a Mojave Green. “Fuckin’ A. What now?”


“Find a new client, I guess. Shower. Sleep.” They were short on sleep these days. It wasn’t helping.


bit back whatever he started to say. This unusual restraint was almost worse than hearing him voice his feelings.


“Look,” Will said. “I couldn’t predict this. Nobody could predict this. We’re independent contractors now, and sometimes things are going to go wrong.”


“Does that mean sometimes they’re going to go right?” inquired. “Because so far…not so much.”


Now it was Will’s turn to hold his tongue. He said shortly, “We’re done here, let’s grab our gear and get the hell out of Dodge.”
Posted by Josh Lanyon at 9:07 PM