I guess -- before anyone gets too carried away by possibilities -- I’d better pull the sheet off and show you what lies beneath. Some of you will love this idea. Some of you will hate it. A number will think I’m crazy. And one or two people will throw a fit because it’s print only.


Yes, it is going to be print only because it is not feasible, with the technology I currently possess, for this to be an ebook. Sorry. I’m not saying we won’t get there one day, but for now. Print only.


And what is this crazy print only endeavor I’m cooking up? It’s called Stranger Things Have Happened, and…well, it’s an Adrien English gamebook. As  in a Choose Your Own  Adventure novel. Only we call it a Write Your Own Damn Story novel.


The gamebook is based on Fatal Shadows. It does not in any way tamper with the end of the series OR even the end of Fatal Shadows -- unless you choose for it to do so. If you want to follow the pre-existing plot for Fatal Shadows, it shall be so. But if you wonder what might have happened had Adrien skipped lunch at Claude’s and been in Cloak and Dagger when it was ransacked…well, you can choose that storyline. OR what if Adrien had decided to go sleuthing at the Ball and Chain leather club that Riordan frequented? You can choose that storyline. Or maybe you wonder what would have happened if a pirate ship had suddenly appeared on the horizon? Yes, there is that storyline too.


Now as in any CYOA story, these are just brief explorations of possibilities, but I think you’ll find them as amusing as I do writing them.

I'm hoping to have it available for order in time for Christmas. Buuuut things are starting to get pretty chaotic at Chez Lanyon (and we haven't even made it through Thanksgiving yet). So...mid to late December is probably the reality.

Cops before breakfast. Before coffee even. As if Mondays aren’t bad enough.

After last night it’s not a total surprise.


Oh, but first things first. You are a thirty-two-year-old bookstore owner. You’re reasonably successful despite the fact that these are hard times for indie bookstores, and you recently sold your first novel Murder Will Out to a small press. That’s about it for your professional life. Your personal life…well, you don’t have a personal life, let’s face it.


Your college sweetheart walked out years ago because you’ve got a bum ticker and he didn’t want to take a chance on getting saddled with, well, you. Not that he didn’t love you and everything.


Did I mention you are gay?


Cops. Standing outside Cloak and Dagger Books at this very second—crowding the welcome mat and leaning on the buzzer.


For God’s sake. It’s not even seven in the morning. Whatever this is, it’s not good news.


You stumble downstairs, unlock the glass front doors, shove back the ornate security gate and let them in: two plainclothes detectives.


They identify themselves with a show of badges. Detective Chan is older, paunchy, a little rumpled, smelling of Old Spice and cigarettes as he brushes by you. The other one, Detective Riordan, is big and blond, with a neo-Nazi haircut and tawny eyes. Your gut clenches as you meet those cold, light eyes. Call it instinct. Call it premonition.


“I’m afraid we have some bad news for you, Mr. English,” Detective Chan says.


You already know what he’s going to say. His face—that professionally neutral expression—is a giveaway. You don’t risk another look at Riordan. He makes you nervous though you’re not normally the nervous type. You head for your office in the back of the bookstore, and you keep walking as Chan finishes, “…concerning an employee of yours. A Mr. Robert Hersey.”


The cops tell you that Robert, who in addition to being your employee is your oldest—and once closest—friend, has been stabbed to death in the alley behind his apartment.


That’s the bad news. There is no good news. They start asking you questions about your relationship with Robert. You stick to the bare facts as much as possible and volunteer no information. You’ve been selling mystery novels long enough to know that much.


“Were you lovers?” Chan glances at Riordan. Riordan must be the guy in charge.


“But you are homosexual?” Riordan never blinks, his gaze never veers.


“And Hersey was homosexual?” In a minute they’re going to bring up the argument at the Blue Parrot. You consider refusing to answer any more questions without your lawyer present. But that’s liable to look guilty, right? That’s what the cops on TV always say.


You keep fencing and they keep probing, trying to find the weak spot in your defense, and then finally—FINALLY—they leave, promising to keep in touch. That’s copspeak for you’re not fooling anyone, English. Before he walks out the door, that asshole Riordan picks up an empty Tab can and throws it in the wrong trash bin. Well, when you own the entire fucking planet, you don’t need to worry about recycling.

If you decide to immediately call your lawyer, turn to page 10


If you decide a shower and some coffee would be a good idea, turn to page 14

What do you think? Even the simplest decisions might now change the fates of Adrien English and Jake Riordan. YOU DECIDE.


And just to add to the fun and festivities, the wonderfully talented Catherine Dair is supplying art for the cover a few illustrations. Here’s a peek at the gorgeous cover panel. 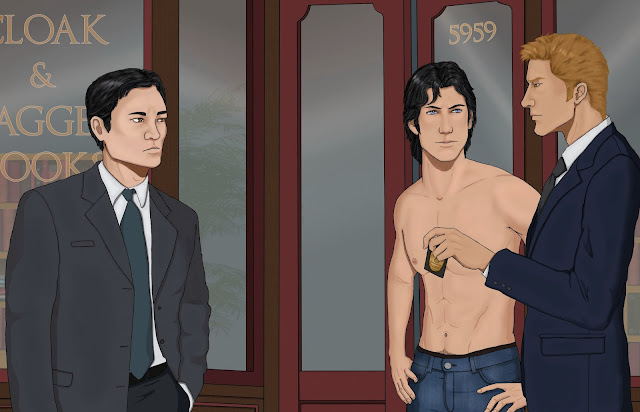