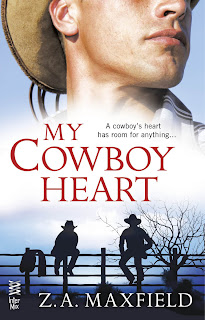 I first met Z.A. Maxfield back in 2007. I was very new to social media and the web and I had just started to blog very tentatively over on Live Journal. I didn't fully (or at all) get how these things worked, so I was mostly babbling to myself, but somehow I began to collect a circle of LJ friends, and we had some really wonderful discussions about books and writing and life in general. One of those friends was Z.A. Maxfield who stood out from the first with her witty, literate, and thoughtful comments. That woman ought to be published, I privately thought. And Lo! It came to pass. Z.A. is now one of the first names to pop up when readers ask for suggestions for smart, funny, and poignant M/M romance.

Next Tuesday, August 20th, Z.A. has her first release with InterMix, the digital imprint of Penguin.  My Cowboy Heart is very possibly the first M/M romance title by an indie author to be  published by a mainstream publisher, and that's exciting news for our little genre. There are a lot of reasons to hope this book is successful, not least is because ZAM has worked hard and earned this moment. Anyway, I preordered the book the minute it was live on Amazon, and I'm thinking YOU should too!

So we first met on Live Journal, wasn't it? What were you doing there? Is it true you were on parole? But seriously, how did you go from lurking on LJ to published author?


You might find this amusing. I discovered Live Journal because I was looking for YOU Josh Lanyon. I only actually joined LJ because I wanted to comment on your Just Joshin' blog.

At that time I had been writing for a while, although I wasn’t yet contracted for publication. I had three novels completed, and I had just gotten to the point of submitting one to some independent publisher’s slush pile. It seemed logical to choose a publisher from the ones who published authors I had been reading.

My first submission got rejected by one publisher, but then I sent a different manuscript to Loose Id and they accepted it. After I had undergone some edits at Loose Id, I tightened up the other manuscript, and it was accepted at Aspen Mountain Press. The rest, as they say, is history.


Do you believe the sins of the father shall be visited upon the sons?


I hope not, and I hope a mothers’ sins won’t be visiting anyone – especially my kids -- either.


You have a book coming out with Penguin's InterMix imprint. Congratulations! My Cowboy Heart is InterMix's first tentative toe dipping into the turbulent, roiling waters of M/M Romance. I'm excited for you. Are you mostly excited or mostly scared? What do you think this book means for your writing career?


I can’t help but be both excited and scared. For my writing career, it’s very nice to be a Penguin Author. Yet I wonder, as quirky as I am, if I’m the best person to do a gay cowboy novel for the mainstream romance market.

I have to admit, I love, love, loved seeing my book there on their Penguin page: http://www.us.penguingroup.com/pages/intermix/

But I could make a case for fifty authors that I know personally who might be a better fit for a mainstream book line.

I wasn’t going to turn them down, was I?

It was great fun, but I'm not a comfortable trailblazer. I usually leave that to others. I suppose this only means that my friends, writers who deserve to be trailblazers in their own right, have a much better chance of getting their work out there too.


Is it true you set the fire?


I did not, but I worried an awful lot someone might come to that conclusion, because I’d only two weeks before ordered escape ladders for my upstairs bedrooms. (I did that because of a news article about a family unable to escape a house that burned down on Christmas Eve.)


What was the most interesting or surprising thing you learned while researching My Cowboy Heart?

I had to research how long a dog has to be immobilized after an amputation. I wondered how hard my characters would have to work to keep a dog from a fairly active breed contained while she healed. It turns out they’re up on the remaining legs fairly quickly and they heal fast.


Boxers or briefs? No, seriously. Why should this question be reserved for male authors? Why shouldn't everyone have to answer?

Neither, which -- not to give anyone granny panty nightmares -- should also not be a great surprise.


Are you a fulltime writer?

Yes. My full time job is writing, but it hardly counts because I went from full time stay-at-home mother to full time writer, so it wasn’t as if I had to write enough to cover my missing salary.


What's the last piece of music you listened to? Did you sing along?


Which of your children is your favorite? KIDDING!!! How did you and the Mister meet?

I met my husband at the Rocky Horror Picture show on Halloween, 1982. I was with a couple of friends, and he sat two seats to my right. After a bit of flirty conversation I invited him to fill the empty seat between us. We haven’t stopped talking since.


Right now I’m working on a series called The Brothers Grime, about a crime scene clean up company owned by three men, Jack, Eddie, and Gabe. Each man gets his own story. The first was Grime and Punishment, about Jack. The second is Eddie’s story, Grime Doesn’t Pay, and the third, Partners in Grime, is about Gabe.


I love that moment when it all works, when you’re writing with the figurative wind at your back and ideas you’ve seeded into chapter two become really meaningful in chapter 22. I love when everything hits the fan and you know exactly what to do to fix things.

I don’t think I like anything least. I find it difficult emerging from the cave of my imagination to promote the work because it seems like that requires a different set of muscles entirely. I’ll bet you know what I mean by that. I thought writing was going to be all lonely and it turns out, I spend half my time writing emails. I love the people I write to, and I really need the community, but it takes my head out of the game.

Switching back and forth from writer to social animal is what I like least because it's difficult for me.


Nope to both. Which… I’m an old gal, so I’m really grateful. *Goes to find some wood to knock on.*


What do you think is the most important thing to remember when creating fully realized main characters?


Great characters are flawed. They believe lies about themselves. They ache for wanting things they’ll never get. A fully realized character -- to me -- is consistent, but never consistently good, or consistently bad.


Is there any genre you'd like to tackle but you're kinda sorta afraid?


Tell us something surprising. Anything. Go on. Surprise us!


I’m pregnant with my second set of twins. That was a lie. But admit it, you were surprised for a second, weren’t you?