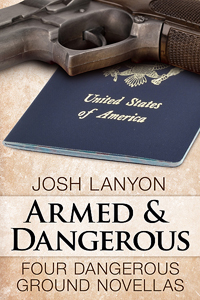 You may recall that in March of this year I ran a contest to select the narrator for the Dangerous Ground audio books. I had so many really good auditions that I honestly couldn't choose between them. Okay, I did sort of lean in a particular direction, but the narrator I liked best didn't appear to have the library of work that some of the other narrators did, so I thought I would leave it up to readers to choose. The DG books have some very dedicated readers, and it made sense to let readers have the final say.

Well, you all got out there and voted -- and lo and behold! My guy won. By a LANDSLIDE. I was genuinely thrilled both with your participation and with the fact that my instinct had been correct.

That winning narrator was Adrian Bisson, and I'm telling you now -- as we reach the halfway mark through the series -- you're going to be very happy with the job Adrian has done on these books.

Anyway, I thought it would be fun to do two interviews with him -- much as we're doing with Chris Patton for the Adrien English novels -- an interview at midway point and an interview at the end of the series.

So here we go with Adrian Bisson following his completion of Old Poison.

How did you get started in narrating/producing audio books? How many audio books have you narrated?


I'm fairly new to the audio book scene, and I'm excited and enthusiastic about doing something I love. Before getting involved in audio book production, I spent three years teaching English in Seoul, South Korea. While I was there I met a voice actor who was involved in making educational materials, and talking to him really piqued my interest. I started in Korea by recording some spots for VoiceBunny.com and did some volunteer narration for Librivox.org as well. When I returned to Indiana last year, I was interested in trying my hand at writing fiction, which has always been another dream of mine. While I was researching the market for Kindle self-publishing, I encountered acx.com and discovered the opportunities that exist for creating audio books. Reading has always been something I'm passionate about, and I love reading aloud and bringing the stories to life with my voice. Armed and Dangerous was one of my very first auditions, and I feel so lucky that I found this project. The winning the narration contest was a huge confidence boost as a rookie and I feel a connection to the fans who voted for me and a duty to deliver the very best performance I can!

I currently have one other audio book completed and released, Monarch by Michelle Davidson Argyle. It's a romantic spy thriller, and it's a great title to listen to while you're waiting for Armed and Dangerous! Just search for Adrian Bisson on Amazon or Audible.


For me, it's all about acting. My approach is to breathe as much life into the characters as I can, to try to get into their heads and portray their emotions and reactions like real people. I try to give every character a distinct voice and attitude, and understand their motivations so that I can bring that out with my voice.

Team Taylor or Team Will?


I identify more with Will, but I can see why he finds Taylor irresistible. Will's serious, sensible, stable. Taylor is exciting, brash, and unpredictable. I think they make a good couple, but I worry about their future. The drama of a wild relationship with a loose-cannon is enticing, but I wonder if Will will eventually get burnt out on the stress of rescuing Taylor from himself. And I have my doubts about whether Taylor won't get antsy once the newness of his daring conquest has worn off. If things go south, I'd be on Will's side.

So you're now half way through the Dangerous Ground series. What has been the most difficult or challenging aspect of narrating the stories up to the point of Old Poison?


The most difficult aspect was probably settling on a voice for David Bradley. I'm not sure why, but I fretted and worried and second-guessed a lot about that one. Most of the other characters were easy to find a voice for, but David Bradley is still a bit of a mystery that I'm sure will be fleshed out as I get further along.

What character was the most fun to narrate? Why?


I have to say, I love doing the villains! I can be wicked, menacing, relentless, and a more than a little crazy. Both of the lead villains from Dangerous Ground and Old Poison were very satisfying to act out.


Lieutenant David Bradley and Agent Denise Varga were both a little hard to get a handle on. I'm not sure exactly why.


It's really hard to pick out one particular scene. My favorite scenes are the discussions between Will and Taylor as they navigate the shifting meaning and boundaries of their relationship. They're so well-written, emotionally true, and full of pathos, and I love having such strong and developed characters to portray. 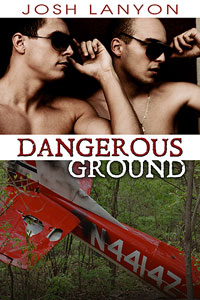 When I auditioned for this project, I really didn't know exactly what I was getting into. When I reached Chapter 4 of Dangerous Ground, I found out! There I was, in the walk-in closet where I record, acting out a steamy sex scene between two guys. It was a little awkward at first, I'd never done anything quite like it before. My aunt had volunteered to be my proof-listener, so I couldn't help wondering what she would think when she got the audio later that day. Well, she said it was great and everyone has been very supportive and encouraging. I'm a professional and I know a hot scene when I read one. These scenes are well-written and red hot. I think that listeners will fully enjoy listening to me give it all I've got!


I'll be incredibly satisfied when the project is done and the fans have the chance to listen and enjoy. I love the idea of bringing your stories into a new medium to be experienced in a new way, and I find it really rewarding to be part of this project. All the fans who voted for me in the narrator contest deserve the best audio book possible, and I aim to deliver it. If I see people buying the audio book, recommending it to friends, and leaving good reviews and feedback, that'll be the the best reward.


Do you ever find yourself wishing the author hadn’t taken the story in a particular direction? Or is narrating a much more detached process?


I'm detached from the direction of the story, my job is to become the characters, and express the experience of things as they happen. This is Josh Lanyon's story, and I'm just along for the ride. I happen to really like how these first two novellas have played out and I'm eager to see what's next!


I really ought to make my own webpage and blog! It's on my to-do list.

My Audible narrator page is where you can pick up my first audio book, Monarch! I am also on Facebook and Twitter. I love narrating books, and I'm really hoping to build a fan base and put out a book every month or so after Armed and Dangerous is complete, so keep an eye out! Armed and Dangerous is a labor of love and I'm taking time to get it just right, but it'll be here soon!