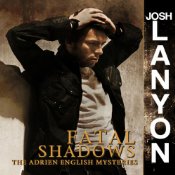 I can't pretend I'm not excited about today's blog. It's the first in a series of interviews with the narrators of my audio books. So many of you seem to be loving the audio that I thought you might enjoy a little insight into the process -- hopefully we aren't taking away the magic!

Today we have Chris Patton discussing Fatal Shadows. The first book in the Adrien English series. Chris was the very first narrator/producer I hired. I had been scoping out various narrators and I had run across Chris, but he sounded so busy with so many projects that I actually did not approach him.

Meanwhile, I was getting some pretty so-so auditions for the book (at that time on ACX gay fiction was definitely an Also Ran). So I was kind of discouraged. Maybe this audio thing was not going to pan out after all. I even approached a couple of narrators and -- though I was offering to pay up front and the going rate -- I met a stony silence.

Then Chris suddenly popped up in my inbox and I was delighted. He was exactly the voice I had been thinking for Adrien English (and I hadn't even heard his Jake yet)!

So here's the first in a series of what I hope will be entertaining and informative interviews.

1 - Tell us a little bit about your background. How did you get started in narrating/producing audio books? How many audio books have you narrated?


I started out as a stage actor at age nine. I basically did that until I was about twenty-eight, which is when I landed my first Voice Over job. I started out voicing Anime, which I still do, but that’s a whooole other story. I then branched off into commercial, elearning, corporate narration, all of that. It was one day in 2010 when I just sort of sat down and said, “I’ve always really, really wanted to narrate Audiobooks… I’m just going to freakin’ make that happen.” And I did. Becoming my own engineer/ producer is something that is still very much in its, oh, let’s say adolescent years for me. I’m getting better and better, though. J

2 - How much acting is involved in narrating a story?


It’s all acting, really. Even if you’re “just narrating” long non-dialogue passages. You’re still selling the listener and image, you’re drawing them in, you’re exciting their senses with your voice. That’s acting. That’s storytelling. I believe that Audiobook Narration may be the purest, most real, bare-bones form of acting that exists.

3 - What was the most difficult or challenging aspect of narrating FATAL SHADOWS?


Figuring out Adrien, in general, and what his whole “deal” was. I guess I mean his arc, his progression from where he had just been in life, and where he was going, and making all of that make aural sense to the reader in my characterization.

4 - What character was the most fun to narrate? Why?


Claude, for sure. I have a definite love for the Queens of RuPaul’s drag race, and Claude just sort of felt like one of them to me. He also, in my mind, had elements of Lafayette from True Blood, so I tried to encapsulate all of that in him, vocally.

5 - What character was the most difficult to narrate? Why?


Jake, probably. I didn’t like Jake much, still not sure I do. But I’m trying to wrap my brain around him. Anyway, it’s hard to give voice to a character that you don’t at first fully grasp or like. But I found my voice for him, went with it, and I think it’s worked really well. Hopefully as the series progresses, Jake and I will get along better. ;-)

6 - Was there a particular scene you think you read especially well? Or that you particularly enjoyed reading?
For some reason, the scene between Adrien and Lisa, having brunch together on that windy balcony(?) really sticks with me, as a sort of nice “slice-of-life and realism” type scene. And then, of course, the climactic scene with Bruce toward the end, which I think sort of dovetails with the next question…

8 - What’s the most satisfying or rewarding part of narrating/producing an audio book?
The finished product, honestly. That’s number one. Great author/customer reviews and the check come in a close second, duh. But really, it is just the finished product, that entity that exists out there now in the ether, or on CD format, as a wonderful story that will entertain such a wide range of people for, well, as long as technology exists.

9 - Do you ever find yourself wishing the author (naturally not me!!!) hadn’t taken the story in a particular direction? Or is narrating a much more detached process?
I’ll go wherever the author goes, that’s my job. THAT HAVING BEEN SAID, there have been times when, while I’m narrating, my eyes are bugging out, or my head is gently shaking back and forth, because I’m thinking, “oh hell NO he/ she did NOT just write that down! Really? We’re going here? Alright, well damn.”

10 - Where can readers/listeners find out more about you and your work?
Generally, www.voiceofchrispatton.com is not a bad start. But, if you’re interested only in my Audiobook Narration, it’s best to go to Audible.com, and type in Chris Patton as a search term, and you’ll pull up almost every title I’ve narrated! Also, if you’re a Tweeter, my Twitter is #lechrispatton.
Posted by Josh Lanyon at 1:00 AM