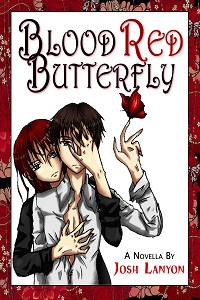 Despite falling for aloof manga artist Kai Tashiro, Homicide Detective Ryo Miller is determined to break the alibi Kai is supplying his murderous boyfriend--even if it means breaking Kai with it.


Let the head-scratching begin! Blood Red Butterfly is coming in for a landing. This started out as such a simple little idea. I would support the release of the Japanese translations of Fair Game, etc. by doing a little Japanese-themed story. So, originally, it was going to be a short story, but then...well, you know me. It got a little complicated. So it ended up being a novella. And I ended up spending about twice the usual time on it because....because....

Let me put it this way. REMIND ME not to start next year off with a big complicated literary experiment.  I like to ease into these things. Start the year off with characters I know, situations that are familiar, books that are relatively easy to write.

That said, THANK GOD this is finished and now available on Kindle, Nook, All Romance Ebooks and Smashwords.