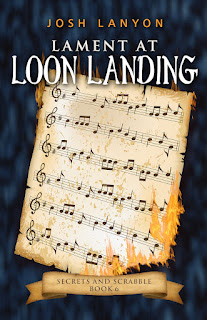 Just wanted to reassure everyone that although I did delete the preorder for Lament at Loon Landing on Amazon, the book is still happening. Because I'm writing so slowly, I needed a few more weeks to get it done, that's all.

In the meantime, I've been listening to the playlist I made for the book, and you might enjoy it as well.

Because this installment takes place during a maritime musical festival on Buck Island, you'd probably expect to hear more (or some) sea chanteys, but somehow that's not happening.

The Kathleen Edwards' songs seem to represent the character of Lara Fairchild, and her character is changing as I write. She's more complicated and more of a catalyst than I originally thought.

Also, Jack and Ellery are pretty solid at this point. They don't have an official commitment, but they're obviously committed to each other despite their occasional clashes. I mean, occasional clashes are a fact of any long term relationship. In book time they've only known each other a few months, so they're actually moving pretty quickly. If this was real life, the people closest to them would be telling them to pump the brakes. Not counting the islanders, of course, because they can see what's what.

Shape of You - Ed Sheeran

Back to Me - Kathleen Edwards

Even if it's Lonely - Hazlett