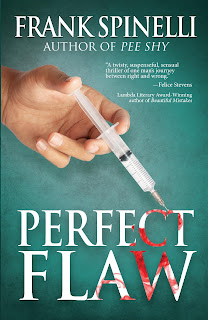 I know I've been a little erratic in my posting lately. Largely because there's not a lot to say right now. I'm writing. Very slowly. That's about it. That sums it up. Not exactly riveting stuff. :-D So I thought it would be a good idea to have a few guests, who DO have something worth talking about, drop by and share their thoughts about, well, among other things, being an artist in a world where the lines between fact and fiction have become increasingly blurred.

(This book has everything I love: a flawed (AKA human) protagonist, a sexy cop boyfriend, mystery grounded in true crime, plenty of suspense and a few surprises.)

Perfect Flaw is available in print, digital and in audio narrated by Cooper North.

In fact, I believe we have an audio code to giveaway, so comment below!

A young doctor enters a world of money and beauty only to find some flaws run six feet deep.

When newly-minted Dr. Angelo Perrotta joins an exclusive concierge medical practice, he believes he has found success. His charismatic colleague, Demetre Kostas only adds to the promise of the new job. But when a series of tragic events transform his dream job into a nightmare, Angelo is confronted by disturbing accusations and the even more troubling cop, Jason Murphy. Now Angelo must unravel the secret entanglements surrounding him not just to save his career, but his life.

Balancing Truth in Fiction Writing: The Struggle is Real by Frank Spinelli

Before I wrote my first gay romantic thriller entitled, Perfect Flaw, I worked on a memoir entitled, The First Year. A story about a young Italian doctor in New York who lands his dream job, working for a Park Avenue practice, only to become entangled in a murder investigation after a colleague, posing as a physician, kills a patient.

But I struggled writing about my first year in private practice because I did not want to disrespect the death of an innocent woman. Anyway, did I really need to write another memoir? I had already written Pee-Shy, which recounted my history of childhood sexual abuse by my scoutmaster who I brought to justice thirty years later. Writing a memoir is cathartic; it’s also grueling and painful. Reliving those years of abuse, revealing intimate details of my marriage, and exposing my family to that pain again after we had repaired our relationship opened old wounds. Plus, whenever someone I knew read Pee-Shy, they looked at me like I was that abused eleven-year-old boy, not a grown adult. Did I really want to do that to my husband, my family and myself again?

So, I put The First Year to rest in a file on my desktop. Years later, I thought, what if I didn’t write it as a memoir? Imagine a story about a young, Italian doctor who becomes ensnared by a seductive colleague and unwittingly makes mistake after mistake so that his life is upended after a woman is found dead? Sounds familiar? Yes, but the similarities to my real life end there.

Perfect Flaw is lifted from the headlines, but once I decided to write it as fiction – in fact, my editor, Nicole Kimberling, encouraged me to write it in the third person – I felt the lock of a metaphorical ball and chain release.

Now, I had license to do whatever I wanted to these characters. My job was not to relate my real experience but to paint my protagonist, Angelo Perrotta, into a corner and then figure a way to get him out of trouble. “Raise the stakes,” is a term I had heard so often by my writer friends, but I hadn’t understood what that meant until I was inventing a story, rather than just relating one. So, I raised the stakes and then kept raising them. I wasn’t so precious about the accuracy of the events because guess what? My book wasn’t a memoir anymore.

Perfect Flaw is based on something that happened in real life, yes, but it’s not about me. It’s about Angelo and his sexy cop boyfriend, Jason.

Still, because I am a doctor in real life, readers believe that much of what goes on in Perfect Flaw is drawn from my life, which took some getting used to. There is no escaping this trap. Readers fill in the blanks with theories about where Frank Spinelli ends, and Angelo Perrotta begins in the same way that I, myself, wondered how much Jack Torrance from The Shining was Stephen King.

We all write partially from personal experience, but also draw from other sources. We draw from our friends, family, and acquaintances. We draw from research and even from other stories to create a whole cast of characters. This is one of the reasons why writing fiction should have nothing to do with the writer’s sex assigned at birth or their gender identity or sexual orientation. Writers create the entire world of the novel, and every single character in it.

Still, now that I’ve moved away from memoir, I’m careful not to include too much of myself in my fiction.

Of course, I can’t help it.

My first rule is that I never include precious personal memories in my fiction because I must save those special moments for myself. Besides making stuff up is way more fun. I can’t think of a better job than creating vivid characters and then throwing them into peril. The second rule is to read while I write. Once I listened to an interview the author Jennifer Egan who said, write what you like and read the genre of what you want to write. No truer words have been spoken when it comes to writing. 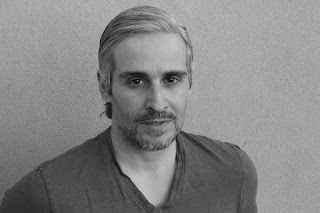 He has contributed articles for the Advocate and The Huffington Post. Writing credits include: The Advocate Guide to Gay Men’s Health and Wellness (Alyson Books),

Pee-Shy: A Memoir (Kensington Books), which has been optioned to be developed into a limited series and contributing author – Our Naked Lives (Bordighera Press) and Understanding the Sexual Betrayal of Boys and Men (Routledge).

He has made appearances on Sirius Radio’s Morning Jolt with Larry Flick and co-hosted Speak Out: Real Talk about AIDS.

Television credits include ABC News, NBC Nightly News, MTV, a national commercial and Sesame Street. In 2015, he hosted a season of Dueling Doctors.

Frank Spinelli is an advocate for child sexual abuse survivors and has given frequent interviews about his experience as a victim of sexual abuse while in the Boy Scouts.

Perfect Flaw is his first novel.