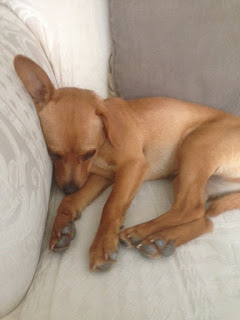 That's 17 points in Scrabble, for those keeping track.

So by now you may or may not be aware that the correct file for Scandal at the Salty Dog was actually uploaded after the book went live on Monday.

The correct files were uploaded Monday, but that doesn't mean you have them. It means they're now available. If you've tried to get updates to the original file, but you're not able to, drop me a line and I'll send you the correct file.

Frankly, that was the LEAST of my disastrous weekend.

On Friday night--no, let's be precise--at two a.m. on Saturday morning, I woke to what sounded like a waterfall in the master bathroom. I staggered in to see what was happening, opened the cistern and water began shooting out everywhere. I couldn't see how to fix it, so I staggered back to wake up the SO, who was sleeping peacefully throughout my exclamations of dismay, the rush of Niagara-like sounds, and the dogs racing around, hopping on and off the bed, to join in the fun.

At last the SO comes back to life--cue resurrected mummy sounds--jumps up, staggers into the bathroom, can't see how to fix it--coz it's a special water conserving toilet???-- tries to turn off the valve below the toilet and... It's stripped. He can't turn off the water there, so he says he'll have to shut it off at the street. Not ideal, but okay.

He staggers out to turn off the water at the street HOWEVER we don't have a normal valve out there. We have some weird jerry-rigged monstrosity that requires a special tool which we don't have. So after trying an assortment of wrenches and hammers and whatever, he says we have to call the city AT TWO IN THE MORNING.

The city says ARE YOU KIDDING? IT'S TWO A.M AND THIS IS A HOLIDAY WEEKEND. WE'RE GOING TO CHARGE YOU. I won't repeat what the SO said. The city finally staggered out and turned off the water.

We all go back to bed.

On Saturday, we begin calling plumbers. No luck. No one can come out before Tuesday. TUESDAY. And we can't turn the water back on because, you know, weird jerry-rigged street valve.

No showers, no washing dishes, no watering the garden, no flushing the toilets. You get the picture. It's not pretty.

By Saturday night, I was thinking it couldn't get worse.

But then it stops. He seems fine.

I lie with Marlowe tucked against me, stroking him, listening to him breathing, all night. In the morning, he is jumping up and down, wanting breakfast, while I'm calling our vet trying to get their emergency line--WHICH THEY NO LONGER HAVE. They didn't even have the answering machine on. NOBODY HOME.

So Marlowe seems perky and fine, but every now and then he has this weird coughing spell--which I now realize could be kennel cough. So I read up everything I can find on kennel cough, and proceed to do all the things to make him comfortable.

Now it's Wednesday and I've currently called four recced vets--not including our regular vet--and the soonest anyone can take him is JUNE NINTH. Our own vet can't take him until the FIFTEENTH.

The plumber came yesterday. Today Marlowe seems better? So maybe, maybe, maybe life is getting back to normal. I'm waiting for the other shoe to drop.