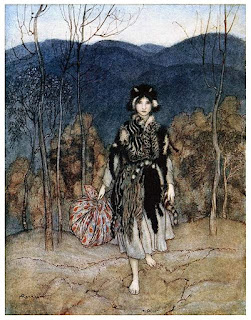 Remember that fairy tale and that Arthur Rackham illustration?

THAT GIRL IS ME.

And let me tell you, the frozen bare ground hurts your feet in winter. :-D

Ah, but it's summer now and the livin' is... Well, I wouldn't say easy, exactly, but the livin' is warmer and the ground is softer.

It's August, we're more than halfway through the year, and my last check-in was May. It has been a very productive year. But better still, it's been a very creative year.

There is still A LOT to come.

But, in case you missed it all, here's what's already been delivered:

Mainly by Moonlight (Witches Brew) Bedknobs and Broomsticks 1 - That just came out this last Wednesday. The next two installments will be pretty quick--October and February, I'm guessing. The plan was always for rapid release, but now I view it as more mandatory than optional. In the age of binge-consumption, this kind of part-one-of-a-three-part-story drives (some) readers crazy.

The Monuments Men (Art of Murder 4) - only one more installment to go! It's going to be very hard to end this series, so yes, I'm tempted to go for more than five books. But that really goes against my long-held conviction that five is the perfect number for a series.

AUDIO - Seance on a Summer's Night (narrated by Matt Haynes)

"Stranger in the House" (part of the Footsteps in the Dark anthology) The anthology is coming out in Audio in November (narrated by Kale Williams and Joel Leslie) I. Can't. Wait.

Slay Ride - A little bit grim for Christmas, I'll be the first to admit, so I released it early. It was originally supposed to be a short story. But I loved the characters and the time period and so it turned into a poignant little novella set at Christmas time, but NOT a Christmas story. ;-)

I know that's not a lot given the current publishing paradigm. In fact, in comparison with most of my peers' production schedules, it's not much to show. But for me? This has been a huge year. A hugely productive year. So obviously I'm really happy about that.

Also I've managed to move ahead with my plans for getting some of my audio and print backlist into wide distribution. Is it making me a lot of money? No. But were these very old titles making a lot of money sitting where they were? No. Am I discouraged? No. Am I going to continue in this direction? Yep.

I am so grateful to my patrons. The community is holding steady. It's not enough to live on, but it has saved my ass more than once. Mostly it's allowed me to invest in things like more audio, taking more time with projects, etc. The next serialized novel will remain exclusive to Patreon for at least six months after it's complete. So obviously, it's not going to be I Buried a Witch! ;-)

Here's what's still coming this year that will be made widely available:

I Buried a Witch (All Hell Breaks Loose) Bedknobs and Broomsticks 2
That's going to be out October 31st.

And then finally, Blind Side (Dangerous Ground 6) - December 31

I'll probably list for preorders within the next couple of weeks. It's nice not having that pressure right now.

I'm also back to working on Mr. and Mrs. Murder with the SO. Or as the publisher likes to call it: Husband and Wife Sleuths of Crime and Detective Fiction. :-D

And then also I'll be at GRL in October.


So that's pretty much it for this year's planned projects. Real life happens, so things can change, but that's how things look right now.
Posted by Josh Lanyon at 1:19 PM