A couple of weeks ago, the SO and I went on a tour of Old Los Angeles. Well, Raymond Chandler's Los Angeles, not OLD (as in Spanish) LA. Anyway, I haven't been downtown--really downtown--in decades, although I do write about the area in stories like Snowball in Hell.

We rode the train down to Union Station and then walked from Union Station to a little oasis in the heart of Hell, known as Daily Dose Cafe where we had breakfast and waited for the tour group to arrive.

The tour was organized by a company known as Esotouric, and they describe themselves as Bus Adventures into the Secret Heart of Los Angeles. They're a bit informal, a little...on the zany side (I don't see that as a bad thing), and they definitely know their stuff. I'd like to have switched out the stop at Larry Edmunds Bookshop (the loose inspiration for Geiger's Bookstore in The Big Sleep) near Musso & Frank's for the Bradbury Building, but other than that I really enjoyed every single stop.

Probably the coolest moment for me was a completely personal (and a little weird) intersection of worlds. We were headed back from Hollywood and I suddenly started thinking that the streets looked familiar. Really familiar. I began looking for landmarks, and we suddenly passed through the intersection of a street called Bonnie Brae. Bonnie Brae is where my grandparents lived--it's where my mom lived when my dad started dating her. Later my aunt and uncle lived there and I was often there playing with my cousins. Which isn't all that remarkable, except that the last time I was there I was about four. Four years old. It actually gave me chills when I saw that street sign flash by. 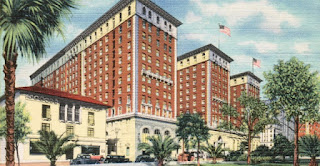 A lot of Chandler's Los Angeles is gone, of course, but it's wonderful to see that many old, genuinely gorgeous buildings remain. Especially given that, unlike in Europe, the American thing is to raze old buildings and then build new ones on their graves. So much more money to be made that way! A lot of the remaining historic buildings are being purchased by foreign investors who typically don't have great reverence for the American past either, so if you write about old Los Angeles or you love architecture or you're curious about the way things use to be, I'd recommend getting yourself down there while there's still so much to see.
Posted by Josh Lanyon at 1:00 AM