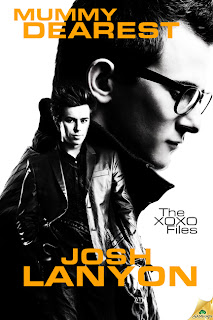 Hopefully onto your Kindle or Kobo or Nook or reading device of your choice.

Genre: Contemporary, Gay, Holidays
Publication Date: 10-04-2011
Length: Novella
ISBN: 978-1-60928-536-4
Series: The XOXO Files
Price: $3.50
BLURB:
The truth is out there. Way, way, way out there!
The XOXO Files, Book 1
Drew Lawson is racing against the clock. He’s got a twenty-four-hour window to authenticate the mummy of Princess Merneith. If he’s not at his boyfriend’s garden party when that window closes, it’ll be the final nail in their relationship coffin.
The last thing he needs traipsing on the final shred of his patience is brash, handsome reality show host Fraser Fortune, who’s scheduled to film a documentary about the mummy’s Halloween curse.
The opportunity to film a bona-fide professor examining the mummy is exactly the aura of authenticity Fraser needs. Except the grumpy PhD is a pompous ass on leave from his ivory tower. Yet something about Drew has Fraser using a word he doesn’t normally have to draw upon: please.
With no time to waste—and a spark of attraction he can’t deny—Drew reluctantly agrees to let Fraser follow his every move as he unwraps the mummy’s secrets. Soon they’re both making moves behind the scenes that even the dead can’t ignore…
--------------------------------------------------------------------------------
Product Warnings
Whoso shall ever open this tomb, er, book shall suffer the curse of the Pharaohs. Okay, maybe not. But set aside a chunk of time for marauding mummies, too many cosmopolitans, illicit sex in hotel rooms, and other non-academic shenanigans.
You can purchase through All Romance Ebooks, Amazon, Barnes and Noble, Samhain itself...
Posted by Josh Lanyon at 11:28 AM