Well, we're done with the first four books. I just want to say how pleased I am with the way the stories turned out -- and I'm looking forward to you giving voice to Will and Taylor in future adventures. So now for our second interview. 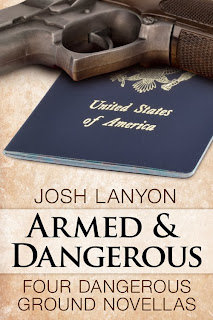 Readers wanted me to ask Team Taylor or is it still Team Will?


After the first two books, I was on Team Will. I saw Taylor as potentially a bit flighty and fickle, and worried that he was after the thrill of the forbidden conquest and the newness might wear off. Things have certainly gotten more deep and complicated as the series goes on. I really enjoy the tension in the relationship and the interplay of two very different guys. Two books later, I definitely have more respect for Taylor. He's great at his job and for all his passion he also has dedication. But when it comes down to it, I'm still Team Will!

Josh Lanyon is such a good writer, his characters instantly take on a life of their own. When I did the original audition back in February, it was just one of several auditions I was doing, and I had never read any of Josh's books. I only had a few pages to draw from, but the voices of Will and Taylor just emerged easily from every description, action, and line of dialog. They came out strong and I never needed to change them.

Will's voice is deeper, to me he seemed like a serious film-noir detective with a touch of Batman, but he has a sense of humor that comes through too. Taylor is lighter, more like my natural voice, more sarcastic and witty. After I'd been doing him for a while I realized that he sounds, to me, kind of like the character Wash, the pilot of Serenity from Firefly.

I don't really test them out ahead of time, I try to just let it intuitively flow from the writing. Two examples stand out as exceptions, though. One was their boss, Greg Cooper. His first appearance was a single line early in Old Poison, and I made that really gruff and deep. I wasn't reading far ahead. When he came back into the story later and was more fleshed-out, he became a much more J. Jonah Jameson voice to me. I had to go through at the end of the project and refine all his parts to make them consistent.

The other exception was David Bradley. I hemmed and hawed and tried several approaches. I really wanted to make him sound just right, but his voice in my head was difficult to make come out of my mouth. He's still the one voice in the series I wish I could do just a bit more justice to.


So how about that David Bradley character? Do you think he keeps getting in the way on purpose?


Okay, this may be controversial, but I think David Bradley is great. I feel for the guy, because from his perspective he and Will would be the best couple (and I think he might be right!) I can't blame him for being jealous, and I think he shows commendable respect and restraint. As much as his presence understandably drives Taylor nuts, Taylor needs to be kept on his toes. Not that I'm accusing Will of being passive-aggressive by letting David circle like a hungry buzzard... from Will's (selfish?) perspective, his confidence in his own boundaries and integrity is solid so he thinks it's sensible and practical to maintain contact. Ugh, Will is just a bit oblivious sometimes.

What has been the most difficult or challenging aspect of narrating the stories up to the point of Dead Run?


My difficulties have all been personal. I took a long time to do these books! I had originally wanted to be finished by the end of June but it took until November 1st. I moved across Indiana, dealt with a devastating breakup of my own a few chapters into Old Poison, and got knocked out with the flu for a few weeks which ravaged my voice.

Besides that, I have a perfectionist streak and struggled with procrastination. Josh Lanyon is a mentor, a patron, and a role model for me and I desperately wanted to deliver my best possible work for him and the fans that voted for me in the narrator selection contest. I'm still a very new narrator honing my craft, and these books were a labor of love. I feel like I came a long way through the process (and went back to completely redo the beginning more than once!) I truly hope that they will be enjoyed.

How many audio projects have you completed now? Any advice for aspiring narrators?

I completed one book (Monarch, by Michelle Davidson Argyle) prior to these four Dangerous Ground books, and I'm currently working on a fantastic new dystopian sci-fi book by a first-time author, The Fifth Column by Robert Corrado. Then I'm hoping I'll have the privilege of returning to Will and Taylor for Kick Start!

For aspiring narrators, I would say to get a decent mic, screw your courage to the sticking-place, and start submitting auditions! When I serendipitously happened to find Armed and Dangerous and whipped up an audition, it was on my very first day of trying! I could not have imagined then what a thrilling opportunity was around the corner. I can't possibly overstate the tremendous confidence boost and motivation that Josh's narrator contest gave me to launch my journey.

Also, stay hydrated and careful with the pacing!

Describe the average day of an audio book narrator.

The ideal prototype of my work day is this: Wake up early, have some breakfast and coffee, go for a 60 minute jog, shower. Make some tea and sit down in my closet where I have my mic set up. Record for 60-90 minutes. Then take a break, drink water, and edit. The way I work, a raw recording session boils down to half the length once all the flubs, multiple takes, mistakes, and delays for planes flying overhead, motorcycles driving by, and neighbor's dog barking, etc are edited out. It takes about 3-4 hours of editing and mastering on top of 2 hours of recording to produce an hour of finished audio. So after editing, my voice is rested and I go back in the closet with some more tea to do another 60-90 minute session, then back to the desktop PC to edit that. On a good work day I can make 60-90 minutes of finished audio in 5-8 hours of work, and that's very satisfying. Then I get out of the house and have some fun.

Now, I have to admit that in the long process of producing these books I didn't have a lot of ideal workdays. Many 20-finished-minute days, and many 0-minute days. I've come along way as far as getting the rhythm down and striving for consistency. I'm on track now to do my current 110,000 word, 13-finished-hour project, in 3 weeks.

Ideally I would like to take my mic and laptop and travel while still working! That's the kind of possibility and flexibility that makes this work so appealing to me.


What character was the most fun to narrate? Why? (Can I just interject here that I loved your Nemov.)

Taylor was the most fun to narrate, always! But I did also enjoy the more exotic cast of characters as well. Nemov was very fun. I tried to channel Ivan Dragon from Rocky IV with a touch of Anton Chigurh, Javier Bardem's hitman from No Country For Old Men. I'd never attempted a Russian accent in a recording before, but I think I pulled it off!


Which character in these final two stories was the most difficult to narrate? Why?

Probably Inspector Bonnet from Dead Run, only because of the French accent! All the French in Dead Run was a challenge, I had to draw on all those years of high school French class. It did inspire me to start learning French again with Duolingo, though! I deeply apologize, though, if sneaking suspicion is correct and she sound a bit less like a Parisienne cop and a bit more like a Québécoise fur trapper.

Was there a particular scene in these last two books you think you read especially well? Or that you particularly enjoyed reading?

As with the first two books, I especially enjoy the scenes of interpersonal tension playing out in the relationship of Will and Taylor. It's so well-written and compelling with subtle emotions to portray.
For gotta-listen-to scenes to recommend to the fans to enjoy, I'll say the sex scenes. You have to get it in audiobook, folks. Whew! I wonder if I'll get fan letters?


Do you have that blog or website up yet? Where can readers/listeners find out more about you and your work?

Buy ARMED AND DANGEROUS, the first four Dangerous Ground novellas in audio right here.
Posted by Josh Lanyon at 1:00 AM