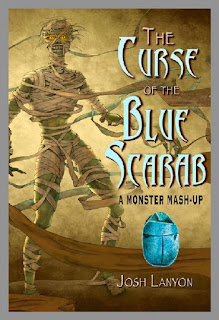 I mentioned in an earlier post that I'm working on this crazy extra project called The Curse of the Blue Scarab. I call it my "monster mash-up," because that's what it is. It's a literary mash-up of a 1912 horror novel called The Mummy by Riccardo Stephens.


Now you may be wondering what the heck is a literary mash-up?


And here's Wikipedia to explain it:


A mash-up novel (also called "mashup" or "mashed-up novel"), is a work of fiction which combines a pre-existing literature text, often a classic work of fiction, with another genre, such as horror genre into a single narrative. Marjorie Kehe of the Christian Science Monitor renders this admixture of classic text as "somewhere between 60 and 85 percent original text, with new plot twists added by contemporary co-authors". These "twists" often include horror fiction elements like vampires, werewolves or zombies.


That's pretty much it in a nut-shell. However a key point is that these works are almost always works that have fallen into public domain. Meaning, they are no longer under copyright.


Now given that in my case the book is already about a mummy, you might wonder what it is I'm bringing to the mix besides a male/male romance? Well...time will tell.


How on earth does it work? Sometimes better than others.


But, for example, here's the original opening bit of The Mummy.


I was sitting at breakfast one February morning, about nine o’clock, two years ago, with Mudge, my servant, ex-sergeant of Marines, at my back telling some yarn about what he said he had done at Ladysmith.

Though 1 live in the West End, it is only in a little flat over a grocer’s shop, in a small side-street off Piccadilly, where my patients are principally the servants (and principally the men- servants—butlers, coachmen and such-like) from the big houses and clubs.


A couple of news-boys began yelling something through the morning fog, about exclusive information and special edition of the Daily Tale. I knew nothing would satisfy Mudge till he got a copy. So I sent him out.

Presently the outer door was pushed open, and a man's voice asked loudly whether the doctor was in.

“Second door right-hand side of lobby,” 1 shouted, and the man was in before I could swallow another mouthful.


And here is a rough idea of the opening of The Curse of the Blue Scarab.

I remember the fog was particularly thick that February morning.

Pressing its formless face to the steamy window panes, grey and dreary as a specter, it crept down the chimney, dripping and hissing onto the smoking logs.

An otherwise unremarkable start to the day that was to change my life forever.

Bird, my servant, an ex-sergeant of Marines, was spinning some lengthy and involved yarn about his exploits at Ladysmith while I attempted to read my magazine and finish my breakfast before the business of the day began.

“Those were weary hours. Lying on that hill while the bullets hailed down on us. I can still hear ‘em cutting through the air and clacking on the rocks. You couldn’t hear yourself think...”

“One can only imagine,” I murmured.

My name is Armiston. I’m a physician living and working in the . This sounds grander than the reality which is a little flat over a grocer’s shop in a small side-street off Piccadilly. My patients are principally the servants (and principally the men-servants—butlers, coachmen and such) from the big houses and clubs.

“Nine hours we clung to that pile of stones. Cartridges dwindling and men dying. I can tell you hope was fading…”

“I feel as though I’m there beside you.” I turned the page of the magazine, studying the dubious claims in the advertisement for Madam Harper’s hair tonic.

In the street below a couple of news-boys began yelling about exciting information  exclusive to the special edition of the Daily Tale. I knew nothing would satisfy Bird till he got a copy. So I sent him out.

Presently the outer door was flung open, and a man’s voice demanded whether the doctor was in.

“Second door right-hand side of lobby,” I shouted, and the man was in before I could swallow another mouthful.

It's the same and yet... It is transformed into something new. And hopefully amusing.


This is my relaxation in between working on FAIR CHANCE, the final book in the All's Fair trilogy. That one's turning out to be a rather tense book, so mummies and supernatural goings-on are kind of a relief!

Email ThisBlogThis!Share to TwitterShare to FacebookShare to Pinterest
Labels: literary mash-ups, the curse of the blue scarab, writing, writing life