Oscar Wilde had it right. No man was rich enough to buy back his past.


That didn’t stop people from trying. Or hiring Rafferty to try. He looked at it more like buying time. Sooner or later the truth always came out. But there was a hell of a lot difference between the truth coming out three days before your wedding or three years after you were dead. 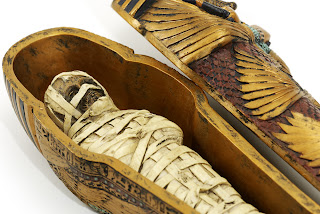 Anyway, he preferred dealing with blackmailers to trailing cheating husbands. This was the first time he’d been asked to rendezvous with a blackmailer in a museum. A museum holding a major exhibition for a cursed Egyptian mummy. An exhibition where everyone except the mummy was in costume.


Rafferty moved to the side as two scantily clad temple priestesses squeezed past on the marble staircase. The nearest Lily of the Nile was giggling and clutching the arm of her companion. The other doll was saying, “I told Gene, it was never like this in .”


They went on their unsteady way to the mezzanine with its planetarium. Rafferty gazed down at the crowded main hall. According to Scheiner, his client, the blackmailer had instructed the payoff be left in a closed exhibition room, a plain envelope of unmarked cash stashed behind the mummy case of an obscure Ptolemy pharaoh no longer of interest now that Princess Nebetah had been brought to San Francisco to wow the customers. At the end of the party Rafferty was to return to the exhibition room and pick up the parcel that would be left in exchange. If any attempt was made to apprehend the blackmailer’s confederate, the deal was off and the blackmailer would go straight to the papers with whatever damaging information he had.


Whatever that information was it had to be pretty hot because Scheiner had never struck Rafferty as a pushover but he’d been adamant that Rafferty follow the plan to the letter.


And that was what Rafferty was doing.


It went against the grain to give into extortion. There wasn’t any creature on God’s green earth Rafferty hated more than a blackmailer. So he’d left the fat envelope of cash as directed and then slipped into the gents and changed into an idiotic costume so he could blend in with everyone else at this wingding. He didn’t plan on interfering with the pickup, but he did plan on tailing the bagman.


Though he’d provided the duds, Brett had advised against pursuit. Brett Sheridan was Rafferty’s…well, never having had a friendship quite like this one, Rafferty wasn’t sure what you’d call it. Whatever you called it was one reason Brett was identifying too closely with the victim. Brett had guts, but the idea of blackmail shook him. Scheiner, naturally, knew nothing about Rafferty’s plan. He’d be happy in the end though, because the blackmail wouldn’t stop with this payment. Scheiner was just kidding himself believing the promises of a guy who called himself Mr. X.


From his vantage point on the staircase, Rafferty watched the waiters, brawny lads in slave costumes, circulate with drink trays and canapés amongst the hoi polloi of . A ten piece orchestra sawed away at a version of “Night and Day,” though the music could hardly be heard over the babble of voices. The place was packed. But then the museum was not especially large.


Originally built in 1920, the Morshead had previously housed a small collection of antiquities and a large collection of oddities. It was designed in a pseudo Egyptian-revival style. From the pair of giant sphinx sculptures guarding the museum entrance to the painted and carved Egyptian friezes and lotus style columns, the building was supposed to evoke the mystery and magic of the newsreels they all watched with such fascination at the picture show. Newsreels that showed the excavations at Tell el-Amarna and the Valley of the Kings -- which was where Emmett Parker had made his now famous discovery of the burial chamber of Princess Nebetah.


Emmett Parker. Rafferty’s lip curled. Pompous ass. There he stood now, posing before a group of admirers, like the grinning, bare-chested palooka on a cover of a Jungle Comics.


Parker spoke and his audience, mostly female, tee-hee-hee-ed obligingly. Among the smitten was Justine Sheridan, looking especially striking in a white gown with leopard skin girdle. She had the dark, dramatic looks to carry off the costume. Not everyone was so fortune. Lenora Sheridan, for example, looked like she’d fallen into a portmanteau of purple draperies and only managed to climb out. Her gray hair was coming undone, as were the draperies. She kept clutching at the fabric slipping from her plump shoulders.


A lot of people to keep track of, and most of them unknown to Rafferty. Even the familiar ones were hard to pick out in costume. He absently hummed a few bars of “Night and Day,” turning to watch the hallway to the closed exhibition room over his cupped hands as he lit a cigarette.


No movement. No one was showing any interest in adventuring down the empty hall to the darkened room.


The fact that the blackmailer had chosen the museum might mean something. Might even mean the blackmailer was someone who worked for the museum. Rafferty’s gaze returned automatically to Emmett Parker, who once again had the ladies gasping and giggling as he recounted his exploits in the .

Honesty forced Rafferty to concede that he probably wasn’t giving Parker a fair shake. Once upon a time, a long time ago, Parker had hurt Brett pretty badly, and anyone who hurt Brett Sheridan was no pal of Rafferty’s. Even so, it was unlikely Parker, newly returned from , was spending his much-in-demand time blackmailing a small time actuary.


No, more likely, the blackmailer had realized, correctly, that pretty much everybody who was anybody was going to be packed into this museum tonight -- in disguise no less -- and his movements would be hard to track.


Rafferty looked for Brett in the crowd below. He spotted him dancing, Brett’s sleek dark head bent to hear what his companion, a slim dame in a sparkly white gown, was saying. He was smiling, but Rafferty recognized that expression as the face Brett wore when he was a million miles away.
Posted by Josh Lanyon at 9:34 AM

Email ThisBlogThis!Share to TwitterShare to FacebookShare to Pinterest
Labels: a shot in the dark, historical romance, ill met by moonlight, This Rough Magic